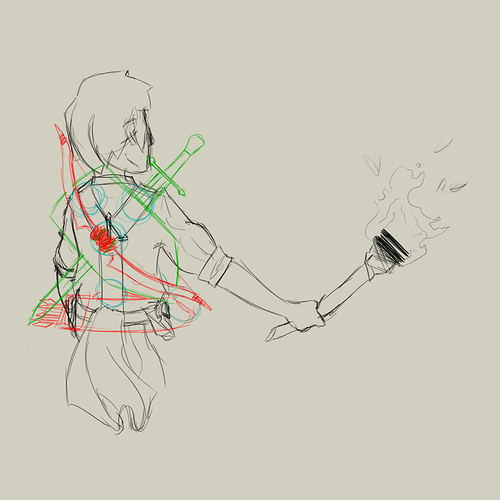 Core concept
With the new backpack crafting being confirmed and the focus on making bags a class-based utility I’d like to propose the following for combat-focused players; Harnesses!

Personal twist
I came up with this idea to allow combative players to hold more weapons on their back to multiclass, players could carry a melee setup as well as a ranged option or even use the lower back slot to hold a dagger or short blade for when the enemy gets too close to use your bigger weapons!

The downside of the Hero’s Harness would be that you can’t really store anything EXCEPT tools/weapons on it! Your 4 belt slots are free for items looted, however!

I think some wrist/forearm harnesses would be great, too! Putting smaller weapons there could save your belt slot(s)

I think it’s better done in this idea Backpack expansion/add-on idea with concept art. There might be some people that want to have a wide variety of weapons, but most combat players just want an easy to access large slot for a bow or large sword and don’t want to lose more than 50 percent of their storage for it and not be able to carry any large items besides their sword and bow.

Normally I get irritated with your constant linking to other posts, because it makes me feel as though you’re trying to tell me to shut up (I know you’re not though), but this one is genuinely good!

Oh thank you, it’s great to know something like this so I can try to avoid giving off that impression in the future.