A concept for bosses

Summary
Bosses that affect the overworld to push heroic players to slay them to save their town.

Core concept
Boss monsters are a staple of gaming. VR is a chance to make gaming way more personal. An opportunity that Alta has grasped firmly and is riding to great success. Boss monsters should be just as personal as other aspects of the game. They aren’t a raid we do for loot for a build. They’re beasts that threaten to poison our water supply, burn our crops and deliver a plague onto our houses!

Personal twist
Below are some monster ideas and a general idea of what I mean when I say to make bosses more personal a threat and something the townies need to do FOR THE TOWN instead of just to get those cool Devout Shoulders for Leroy. 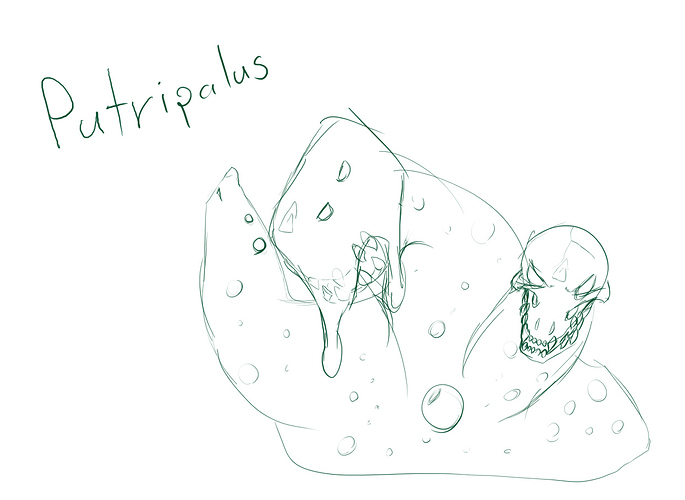 unknown.jpg1241×905 128 KB
Periodically the water of the town will grow moldy and full of rot making it impossible to produce food, soups, and potions without poisoning the townies. Deep in the aquifer connected to the well lies the poison core of the gelatinous beast Putripalus, a 3 headed slimy dog-like creature made entirely of decay and stagnant water! His rot permeates throughout the town killing crops and poisoning the water supply!

Slaying Putripalus drops his core which melts into the ground for a good period, freeing the water and purifying the land. 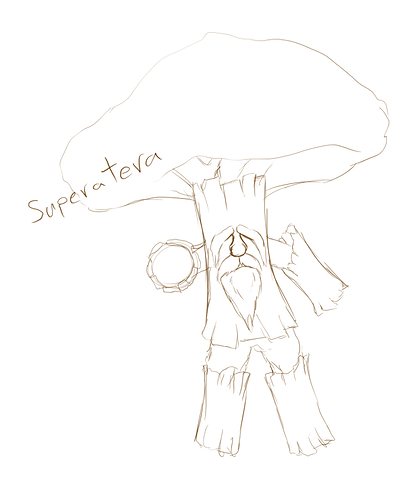 unknown.png696×871 87.4 KB
The trees grow strong and uncuttable, gotera flood the edges of the forest, making it dangerous to enter the woods. A dense fog fills the air, allowing the Gotera to leave their woods and assault the town! Superatera leads his army!

Similar to the smaller Gotera Superatera is a much larger tree-like entity with two trunks for arms capable of rapid-firing the seeds Gotera use. The long branches of Superatera release the bomb seeds Gotera fill the air with, making it dangerous to be in melee range of Supertera. Superatera has a special ability, however, where he can overclock both arms and let out a salvo of hard-hitting seeds at the townies fighting him. Upon dying he falls to the soil, planting himself to bide his time for his next assault. 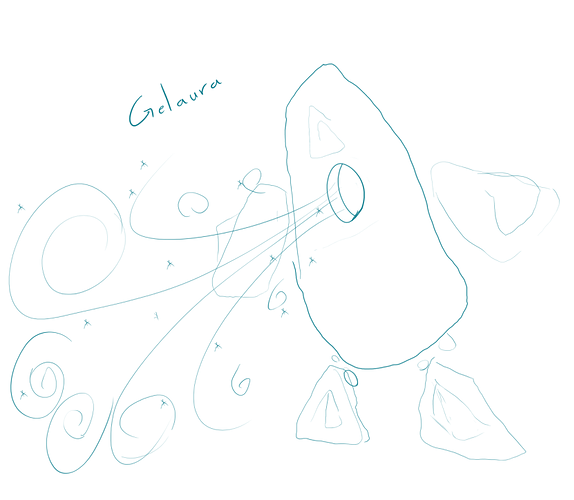 unknown.png832×724 77.8 KB
A cold wind fills the air, the water frozen, the crops won’t grow, and the air stings the skin. Snow lightly falls… and falls… and falls… endlessly! It’s too cold for fire and ice blocks the mines! Gelaura threatens to bring a new ice age to the townies!

Fighting Gelaura takes skill and speed, spending too long will result in being killed by his icy gales! Gelaura can also force the ice from the ground upwards like spikes requiring the heroic townies fighting him to move swiftly and keep moving or be encased in ice. Upon defeat Gelaura falls, the howling stone that makes his body emanating the slow hum of the winds once more, letting the ice melt and fires burn once again.

SuperTera looks really cool, could definitely see them doing this.

Very nice. Maybe blocking off essential locations and resources of the town might be a bit much, but when the map is expanded these bosses would be really cool to have, preventing immediate access to a bunch of secondary things. Like an old technology pumping station that has become clogged with Putripalus slime, and an entrance to a second mine, a forest where you can find rarer / enchanted wood, etc?

I love the idea of these bosses bringing the community together, and encouraging different classes to work together.

Well these are my ideas for major bosses, they should be a critical event that causes lasting harm
Perhaps minor bosses like field bosses can be for blocking off auxiliary resources

@TheFlerffyBurr Agree with @Eturian here. Not sure how I like the idea of blocking off town bits and basically making the game unplayable in certain aspects, the town should be the safe place with the occasional raid or some other threat. World bosses should be smaller bosses like a big boar or a bandit chief or something that roams the world and can be defeated by one skilled and geared player. There would then be dungeon bosses like a queen wyrm (see this idea) that either are just dungeons or connect to new parts of the world. Like the big tree guy could be the boss inside Hazy Hollow that comes out of the hollow when the roots blocking him in the ground are cut (literally just made that up), he could then proceed to slowly make his way to the town passing mountains and amassing a large army of gotera. The ice guy (he’s probably my favorite) could block an area where it is always snowing (i know we’re getting seasons, but this place is a full snow area with cool ice spikes and special loot). The acid thing probably is suited best with what @Eturian said, blocking water pipes to a new area or a new mine or something.

I get that you want to bring the community together and everything, but these huge bosses making everything so cold the game is unplayable, and poisoning our water so we can’t grow anything is a little much. But the tree guy slowly making his way to the town is something I like, this huge gotera raid would happen extremely rarely. Also the bandit chief I mentioned earlier could raid the town with his/her kin (there is actually an idea about this).
Sorry for the text wall, have a great day.

Yeah … if there’s only one mine, and one water source to feed the crops etc, then you can’t really block those off and then expect people to have the resources to fight. These bosses would be really nice if they were optional world bosses that people could band together and go out hunting at the end of a “dungeon” and defeating them rewarded various boons to improve the basics that the town always provides. (people would obviously want to unlock the things they’re guarding anyway). Then it’s a risk - reward thing that benefits everyone, rather than “town is fucked so you MUST fight this huge boss before you can hope to continue playing as normal”.
I really love your overall idea, so honestly I’m not trying to piss on your parade, I just think the finer details are a little too harsh.

Yeah, I think it might be best if these, like @Eturian said, are wandering around the world and give boons for killing them, though I would say it should be more than just things that benefit the town since not everyone want to fight bosses just for the sake of the town.

There is also the idea of some bosses blocking off newer places, or making them uninhabitable until they are defeated, like the Gelaura or just some kind of frost dragon inhabiting a different town keeping the whole thing frozen a little bit like what @Zebulaun was saying, but once you kill it, it becomes a new town for players to be in, though if we get to the point of server resets not being needed, then it could come back every few winters.

Though for more intelligent bosses it might be cool to have alternate win conditions besides killing, having a boss, like the frost dragon from the idea of freezing a different town, protecting a town would be cool, though that would mean giving up one boon for a different boon.

Every time you went of task in Breath of the Wild

Oh another thing I want to add is having a balance between bosses being unique and out of place.

The deku tre- Superatera is a good example of this, it’s very much it’s own thing, a very old gotrera (I would assume) that has gotten power from a very long life of taking root in the ground. It’s related to a weaker monster.

Gelaura seems a bit more out of place though, if it was a golem it could be related to the new mobs like a bigger version. If it is some kind of ice golem, it would make sense to have something simular to them.

Same thing with Putripalus, if there was a simular smaller mob that is a unpolluted version that can be polluted and supposedly Putripalus is one that just got into a very polluted water supply, or maybe one that got unto it early asnd has continued to suck up the pollutants over time until it got to boss level and then started releasing it? What is Putripalus is actually a liquid creature created by the old townies to purify the water, but something has gone wrong, or it has just gained too much pollutants?

I’m not saying every boss needs simular creatures, but more of a reason to come about like if there where dragons, you would expect more two be the reason where it came from. Old constructs made by the old townies is a good reason for it’s creation.

Really what I’m saying is give them a place in the world with a reason why they are there.

It’s been a while since anybody commented on this, and I wanted to show my feelings on these bosses:

*I love the idea of them being an annoyance more than a lootbox
*I really like how harsh the punishments are (more detail below)
*All of the bosses are extremely creative, if a touch out of place (see Edit’s comment)

Anyhow, the punishments…
I love that they’re harsh but reasonably able to be worked around. If only one boss can spawn at a time, players would always have access to the tools needed to make weapons to kill the bosses (blocking off mines? Handles from forest and ores from quarry. Blocking off forest? Find handles in the mines to make weapons. No food? Well, better work together and scavenge what you can from the fields and share with the hungry). I don’t want some minor resource to be blocked by these guys; They should leave a noticeable mark on the world, meaning everybody wants the bosses dead, not just that one carpenter who really wanted that new wooden bowl made from that one rare wood found in that one small forest for no particular reason.

Sorry for text wall, I tried to break it up a bit.