A What?
An outdoor theatre where performances can be held.

Core concept
The idea is to have a circular seating area with graduated levels for the audience, a main stage for performances, and a backstage area for preparation. The backstage area could be a partitioned area.

Feedback
Please write your own ideas and opinions below.

Very good idea! definitely think it could suit the style and atmosphere of ATT. I can’t find a good picture but I’m imagining one of those old semi-circular stone theatre stages. There’s a small one in Cornwall that I’ve been to years ago.

2D props and backgrounds are an excellent idea. Simple example - the stage puzzle in We Were Here, if you’ve seen it? It has exactly the levers and pulleys backstage that you’ve talked about, and I think they even have a couple of controls for lighting.

Only things I’d suggest altering is maybe leave damage on for anyone on the stage, but have a respawn point backstage, so actors can actually kill each other in the play but easily respawn close by. Then the stage can also be used as a formal duelling arena, where people can settle their quarrels in a more controlled setting and also spawn right next to their dropped items.

Maybe a lever that switches on stage damage to on, off or greatly reduced?

The only reason I suggested the controls being on the side of the stage is due to how difficult it would be to see what’s happening on stage from backstage. A way around this could be a screen showing the stage which is viewable backstage, but I’m not sure how much work that would be to set up or how it would affect server performance.

Just googled “Cornwall outdoor theatre”, and its very similar to what I’d envisioned. It would probably work very well with ATT’s design asthetics.

Yes, maybe the character customization could be replaced with the theatre and it could be put somewhere else. Damage should be disabled on stage, but weapons should obviously still be usable for theatrical purposes and the little boom effects that happen when players are hit should also still be there. I was gonna say something else but I forgot it, probably wasn’t important.

As far as having a screen backstage to see what is happening onstage … I feel like that would be incredibly easy to make. We already have cameras in ATT. Just have one that’s tied to the theatre area (respawns there if taken too far) and has a second output to a screen behind the stage. Could legitimately film peoples’ plays that way too.
Aaalso, why not have the background of the theatre front stage a big screen too? Then people could go out location scouting and taking photos that they could bring back to the theatre and upload to the “props” inventory?

It feels like this would better fit on a seprste server thing like the suggested arena since having a ton of props, lighting and greenscreen seems out of place.

Also if it was moved to a seprate server (maybe the same one with the arena people have suggested) the theater wouldn’t have to be a balance what the township would realistically have and what would be fun to have, like colored lighting and fog generation.

I dont think it would be too weird to have fog generation or colored lighting, just have steam boilers that pull open on command and release steam. For colored lighting just get stained glass or something else translucent and colored and just shine light through it. The whole joy of having a theatre is to walk by and see a play and think “wow thats so cool, i’ll watch,” it’s part of the atheistic. It sounds lame (to me) to have to join a different server just so you can watch a play.

Steam and fog is very different, one big difference is that steam rises and isn’t that long lasting since most of it turns back to water quickly as it cools off.

Yes obtaining stained glass at least wouldn’t be that hard, but then you’d be limited to how many lights you have unless you have some advanced tech to have spot lights cycle the colors. Not to mention the crystal light is already colored, so anything that don’t normally have blue in it isn’t viable unless we get the other crystals.

Part of the atheistic of the theater is walking past and getting interested, but if it has colored spot lights (or just spot lights in general) it will be compromising atheistic a large part of the night in the game, such that we go from a night being lit by the moon, stars and torches, to a LA light show in town.

I think the theater being on a different server with the less survival world fitting stuff (arena with plenty of items, theater with every prop special effect you could need, etc.)

I’m all for a theater in the main game, but as one that sticks to something like the roman theaters but with some crystals that can help light it.

I mean the whole idea that we could make theater lights came out of nowhere, we don’t even have any crystal lights in the game besides crystal sticks, they don’t turn off so the only way to make a spot light would be a lot of crystal, a half sphere with a mirror coating the inside maybe some focusing lenses and a sliding mechanism that is operated remotely unless we have players manually controlling them.

It’s a fun idea to have a theater with all the bells and whistles of a modern one, but it’s completely unrealistic.

I could be wrong about what the OP meant by “lights” and he didn’t mean theater lights.

Honestly you’re right about the Roman theater thing, I don’t want a fancy light show either, I think having just a stage would be fine, it wouldn’t even need any fancy lighting or smoke.

I think it would look really nice if it had that mix of how the televator looks and the roman theater with the lights in the roof of it to keep the stage lit at night if people want to make a night play.

I think maybe we could have fog if it was collected from some place like the hazy hollows or generated using some spell, it would mean those extra effects really mean the people putting it on put effort in it if they collected resources or have mages for some effects!

Daaang I didn’t even think about mages. All that sounds great.

My original view for lights was something simple, such as a few gas lamps. Just enough to be visible at night, rather than a major effect.

This idea came from listening to other players talking about wanting to make simple videos without being interrupted.

Many people will prefer to make videos out in the field, but not all. I figured if there was a performance area, it would open up new possibilities.

Another hope was that this would attract some people into making their own performance based videos, generating even more interest in A township Tale.

After looking over a lot of the server applications, it seems like roleplaying and attracting video creators are something the community wants.

Personally I would hope that the format of a theatre would be kept simple, and even my own original post may be a little bloated.

I envisioned something with very simple 2D props, a few entertaining people on stage, and a group of other players in the seats, cheering them on.

The style of the televator area would work perfectly, and is not dissimilar to Cornwall’s outdoor theatre.

A glorious idea! It may be a fun spot for people to slack off and have their own fun instead of everyone kinda stacking up at the blacksmith. My brain immediately pictured this scene in terms of set up. YOU HAVE MY VOTE 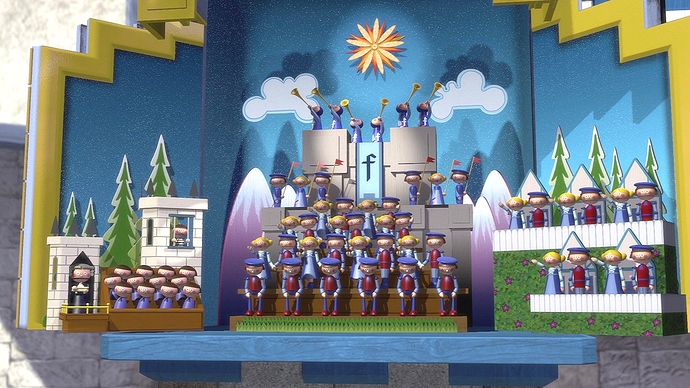 I’d also be happy with a greenscreen & green table even if they’re only accessible by spawning via console.

Having the ability to save photos as .pngs with transparency would have many uses. Profile pictures, wiki images, images to add to videos. Probably a hundred things I can’t even imagine.