TL;DR
Two skills that can automatically retrieve arrows based on if you use quick shot or charge shot builds.

the biggest problem with archery (aside from the hitreg) is the tedium of retrieving arrows. the existing arrow retrieval skill’s only useful if you have more than three arrows in the same area and the range is very small anyways. it doesn’t even work with quivers. nets are much easier, but still dont work if the arrow has lodged itself into a wall or surface. this leads to arrows being a real pain to clean up. resolving this issue may bring archery out of the “hobby” status it currently has now. these are the ideas I came up with:

True Strike will return the arrow after it has hit an enemy/player/dummy. if the arrow misses and hits a wall or other surface, it does not return. this would be better used for quick arrow builds, but you need to be skilled enough to hit your shots! 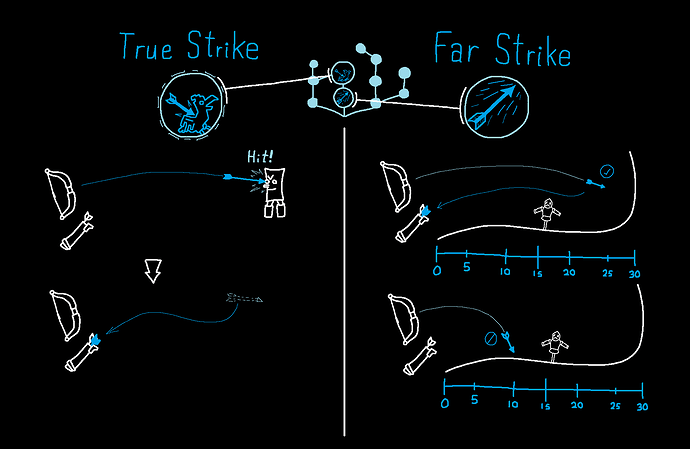 ​
the addition of these skills would make archery far less of a hassle than it is in it’s current state, allowing players to use their bow freely as long as they can either hit their shots or try and go for long range targets.

what do you think? is the range given for far strike too short? is there any changes you’d think would be better? open to feedback

main here.
I love the idea because it would not only fill skill slots to push people into class specialization, but also because it would replace useless skills with something practical that people would actually use.

Also this is very good concept art, but I would probably attach these between the two existing branches so you have to get tier three of of either quick shot or snipe, so it would fill at least four slots minimum if you went for true or far strike.

I feel like if you made it the first skills you could get, it would make farming xp too easy and would affect progression.

The reason I don’t think these auto collection skills are op is because it only applies to specialized classes for late game, and doesn’t affect player progression nor ability. It just makes the game less tedious. It’s hard to think it’s a mechanic that could be abused thinking it functions properly.