Crafting chalk to create symbols around the map could be an amazing way to leave breadcrumbs, alert other players to danger or loot, and provide an interesting spice to exploration.

This is an expansion of CouchyKun’s idea, put into a new post to avoid necroposting.

Chalk is first crafted by hitting coal with a hammer or rock next to an ash pile, which creates a single stick of grey chalk. The color cheats slightly, when the chalk is used against a surface, it slightly darkens or lightens the shade of grey to stand out against the surface better.

When a player wants to draw on a surface using chalk, they are only able to draw a preset list of symbols, to avoid rude markings covering the server. My abilities as an artist are subpar at best, but I’ve provided some possible examples of symbols. 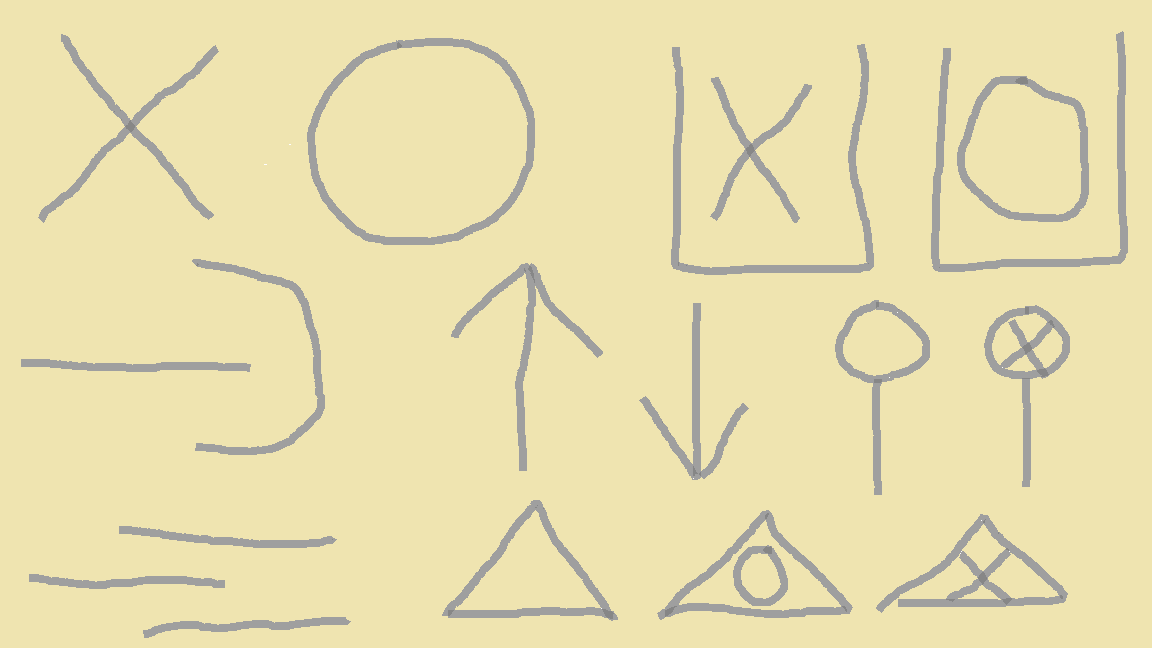 These symbols have no inherent meaning, and it is up to players to decide what they signify.
To draw with chalk, you put your chalk against the surface, and a spectral list of options appears, with a similar appearance to the skill shrine demonstrations. The player writes in the symbol of their choice, which snaps the closest symbol to what they drew onto the surface. The player can wipe off the symbol with their hand to remove it and try again, should they fail to write the symbol they wanted. No two symbols can be drawn within a certain radius of each other, to avoid cluttering and spam, and they last an ingame week before fading away.

It would be cool to use it for magic later on as well. Like placing area spells etc.

I am not sure any of our current tech supports that and there will be memmory limitations too, as people make more custom signs memmory increases.

Magic isn’t something I thought about, but that would definitely be amazing!
My thought is that memory could be fixed if there were only preset symbols that you guys decided on, but had no set meaning, so that different servers could use them differently.

It is more like tagging, but not as cool as organic drawing of stuff.

But if it is part of triggering area spells, some area spells can have just warning functionality.

The cool thingy would be to have a spell which records your movements like for 5 seconds and then when other people approach the area, it plays back the hologram. So if you would like to warn somebody you need to use gestures.

Now that would be dope. And yeah, “tagging” is definitely more of what I was thinking when I made the idea. Maybe a “magic” skill tree unlocks new symbols you can make, that are focused on magic?

A more robust system for magic runes, such as this post cough cough by me cough cough Rune Crafting might better suit it.

As for making chalk symbols without letting players have too much creativity ability to draw nsfw stuff, each time a player starts drawing a symbol they could be presented with with a system where they draw shapes/lines, and attach stuff to those shapes/lines, such as making a line and attaching a circle to it, drawing an x in a circle, drawing parallel lines to a line, etc. It should give players some freedom in creating their own symbols but as long as you limit the complexity of symbols it couldn’t really get graphic.

There might be a way to reduce this by locking them to a specific color or having specific symbols such as only these to keep memory or only being able to place maybe 3 to 4 a day and such maybe simple ones like: danger, directions, like that or instead of not costing resources it does but only common items like rocks and a hammer to ground it up and become a stick in your mini menu thing that tells how many uses