Crafting arrows with the current physics sucks sometimes. This machine is meant to both be a band-aid fix to that problem, and also a way to make arrow crafting a smoother and easier processes. The original idea was a machine where you put 10 arrow shafts, and put the fletching on an arrow, then spin to the next one and repeat. This is the same with the arrow shafts, just less (8 arrows, didn’t want to draw more arrow spots.), and once 1 or more arrows are on the machine, you can start putting your fletching and arrowheads onto the shafts, rotating it if needed to reach a certain arrow. This is meant to be a more mass crafting of arrows, while still having that physical interaction with each part of the process that this game seems to value.

Here’s an “animation”, it’s more or less a slideshow presentation.

Lemme start by saying THIS IS AWESOME and your animations are always a delight.

The distance needed to reach tip and feather on an arrow makes a horizontally-aligned workstation seem awkward to work around. You may have to take a step or two to reach one side from the other…

Would it maybe make more sense as a vertical column, like a barber’s pole? It could use the loft system from crafting tables to control height.

I like the horizontal method. With my personal experience, I believe it would be less tedious than a vertical method. I dislike how some things that are crafted I have to reach up to hammer.

But you wouldn’t hammer the arrows… it would be snap release like it already is?

The other pro of vertical, is that in the space of 1 horizontal arrow machine, you can fit 2 or even 3 vertical machines, if you include the space needed for handle + operator.
It would also allow easier immediate access to all the arrow slots, without the need to rotate the drum, since you could walk around it

In a perfect world, maybe we could have both setups?

I’m flattered you like the animations. Thinking about your idea of the vertical one, I’m having a hard time figuring out where the rotation handle would go, the vertical one might not even need the function of rotating if you can easily access everything in front of you, which would just leave the loft system which seems much easier to figure out compared to rotating.

I was also thinking of a way to be able to rotate the horizontal one to a vertical one but well that seems difficult to without intersecting through the rotating parts.

I believe the player should be able to work the machine in a way that feels intuitive, and that also is accessible to the different ways people may want to use it.

The Arrow Fidler
Similar in design and functionality to The Arrow Finagler, functions closer to a spinning magazine rack. The difference is that it is now vertical and you can rotate it via pushing your hand over it to rotate it (similar to how you swipe pages in the character cosmetic menu.) The problem this one doesn’t address is adjusting height. 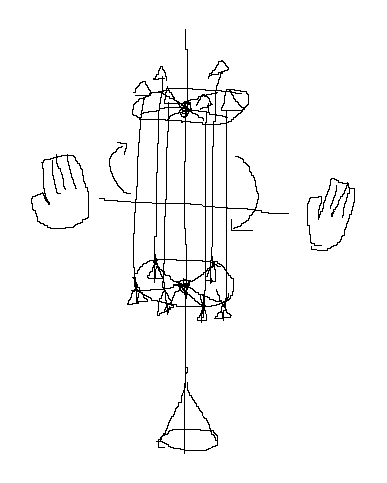 The hand spinning might work, but it could also result in people accidentally grabbing arrows instead of turning.

To allow a hand crack rotation still, at the “front” of the station at the bottom, similar to the crafting bench’s raise/lower crank.

Just takes 2 gears to convert the rotation into vertical motion, though I’m sure there are other ways, like with a belt powered mechanism.

The bevel configuration in the included pic should convert the direction of energy the way you intend.

Edit: made a quick sketch over your drawing to illustrate the setup. Forgive the drawing skills, I’m on my phone at the airport waiting for a flight…

That drawing helped to understand what you meant, I wasn’t visualizing with the gears alone very well. I liked how you illustrated it, the main problem I saw with that was that the horizontal crank wouldn’t hold it’s structure, so it’d just fall. So I added some supports to it. And a bit more to the bottom of it, since I imagine the pole under the gear wouldn’t be moving. Though looking at it now, I could probably change it to have the whole pole spin and the support around it stay still, and the horizontal crank would be supported on only the support rather then the support and the pole. 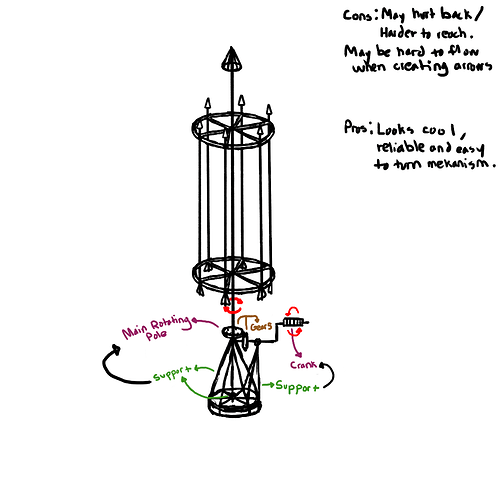 I had some ideas of what the mould rack pulley system would look like for this, and I came up with this.

I think having momentum with it would be fun too, like an office chair, you pull it in some direction and once you let go it loses its momentum over time rather then stopping as soon as you let go. It looks awkward how I drew it, so I think the rope and supports around it should be much bigger then is shown. 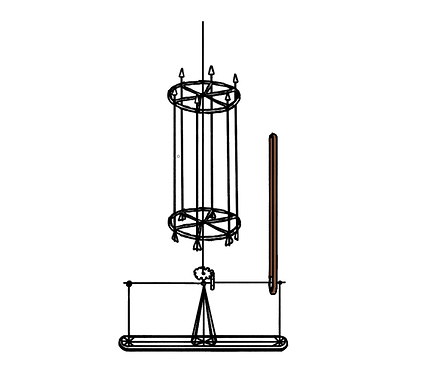 No clue how this is gonna be held up but something like this.

Edit: I approve of the horizontal design. Vertical design looks like a physician´s lampshade.