Magic, and how it would work

Magic can be used for different tasks such as lighting fire, combat both offensive and defensive, exploration and maybe more.

First off is how casting would work. Depending on the type of magic you want to use, you would have to move your hands a certain way and move your fingers in the most basic ways as to not limit any VR users. This should be the only option, as voice recognition can be extremely weird as experienced in other games. Each time you use a movement correctly as well, you get a small glow from your hands and a “ting” sound. The color of the glow would vary depending on the spell you’re casting.

Second, the magic. Spells could be both elemental and, well, not elemental regarding the general type it is. Elemental could include fire, ice, earth, lightning, and other ones I don’t care to mention as of now. These can be used for combat and exploration. Fire spells, for example can be used to light campfires, torches, or even cook food. Lightning can be used for combat and can temporarily run across your weapon for an added lightning effect in combat once your weapon has been swung. With Earth maybe you can lift medium sized rocks off the ground and throw it at an enemy (not a Boulder, though. But maybe for an advanced level) and so on. However other types of magic could possibly be implemented in later stages if magic is going to be considered. Such examples would be like conjuring a weapon or shield. These spells would be weak at first, but the more you learn your movements, add on more movements, and keep using such spells they’ll advance to become stronger and stronger. That way, you’ll always have a sword, hammer, shield, axe, bow, or spear at your side. Perhaps during combat you can make a barrier that surrounds you entirely and reduces overall damage, or even learn to do more. Maybe you can use a magnetic sort of spell to lift up your weapon from places you can’t reach. Or maybe, you can conjure an orb of light overhead that lights up the general area around you. Magic in general can spice up the game, and add a new generation of mages and warriors to take down their foes.

Finally, advancement. Magic at it’s base form would be weak, especially the offense and defense kinds. The only way to level up/advance your magic skill (as mentioned earlier) would be to learn new hand movements to add on to the base spell or use the spell more often. This would mean the players would have to put a lot of effort into more learning magic, and experiment often.

Along with all these factors, there could possibly have potions be added that enhance such spells from a little stronger to extremely strong depending on the different contents the potion is made of.

I think magic can also be in the form of support. I.E: a friend could boost your dammage, heal you, etc.

You have my vote sir

I love the idea but I hate drawing things. So if you have to draw a rune in the air to get a fireball im gonne uninstall. But if you need to do spesific things (for example). Hold up your hands and then you can trow lightning. Or smash the ground with your hands and then you get stone hands that can be used as a melee weapon I WOULD LOVE IT!

Simple spells like a fireball and lightning would be easy to draw/motion. If you just do a simple motion in general it could probably be spammed and easily manipulated. And I’m not talking drawing runes. I’m saying you just have to move your hands a specific way with a specific gesture. The more complex it gets, the better it is. Doing hand motions can prepare your combatant (if it’s a player) for defense and it can be a fairly even battle.

TLDR: You don’t draw runes, you do specific motions and gestures and it’s not just a simple movement so it can’t be abused.

Aside from that, here have a chart 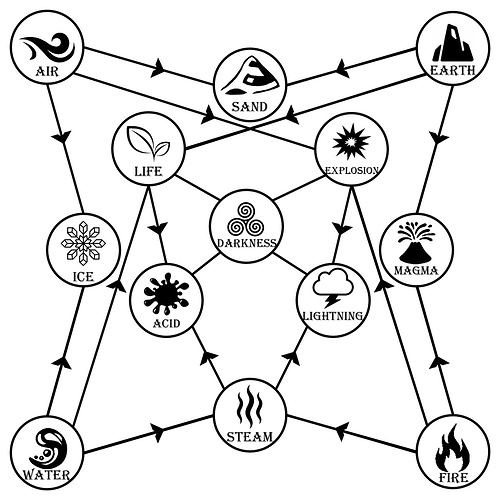 ElementalMagicChartATT.jpg1296×1296 211 KB
Shadow may look weird there but it’s a combination of all the tertiary elements to create shadow, kind of like how all the colors of the rainbow mixed is black. Also, don’t bother me about the symbols, they are temporary and only exist to reflect the element.
3 Likes
zakmcpants July 30, 2019, 2:32am #6

What are we going to use steam.for

I don’t know, you know how steam is really hot when you put your hand above a boiling pot. It’s almost as if you have put your hand in the water. Feel free to change this or criticize it as much as you want

Fucken Magnets How Do They Work

Concerning the gestures, I quite agree with Captin-Ezreal.
Ok they must be a little difficult to be more effective but drawing runes in the air seems quite hard, not in the execution way but more in the detection, not being able to cast a spell because you weren’t 100%.

A game I tested was the “The Wizzards”, the way you summoned spells was quite nice.
A simple fireball would have you twist your hand as like revealing the ball and thus could be thrown.
To summon an icy bow you had to extend your arms and cross them in front of you.

Those movement seem to be the happy medium. Simple but not as easy that you mistakenly throw a fireball in your face.

That’s what I’ve been implying this entire time. You DON’T DRAW THEM. You move your hand a specific way, twist it a specific way, make a specific gesture, all of it coordinates with each other. Yall have just been thinking of it a different way.

Throw a haduken to shoot a fireball.

I noticed that the right stick button doesn’t do anything so maybe if you were to hold it down orbs would show around your hand with strain symbols indicating the type of spell, moving your hand over the orb and letting go would great a glow around your hand (different colours for different spells) then by holding both grip and trigger in the same hand would activate the spell indicated by a particular effect such a fire ball for fire ball or a lightning effect for lightning and a dust effect for earth so on and so forth. Holding the trigger and grip for longer could make the spell stronger, but a shrine could be implemented to unlock sertain spells like any other skill. To not have a to growded hand you could hold grip and twist your risk to show more spells. If you were to rub your hand against a weapon it would embew it with that elements properties. Some spells could be as such

Fire ball
Lightning strick
Rock throw
Energy shield
Energy sword
Freezing
Heeling
Light
Darkness
Speed
Strength
Telekinesis (very long hold to use this and throwing it must hit the object then holding grip and trigger once more you can move items, mobs and players)
Wind (3 tiers, 1 small blow, 2 big blow, 3 tornado)
Then any you can come up with

But you definitely have my vote