Since the upgrade to unity2020 i get a black screen whenever i start the game. I found out that the game itself worked perfectly fine, but the comunication with steam vr was not working properly. The log file also showed “Screen position out of view frustum”.

IGN: DarkDrawz
Quest 2 with link, steamvr.
Quest 2 controllers.
I tried switching my runtime to oculus, and then my view is choppy when I look around, I switched back to steamvr and it still does this. I also noticed it opens steamvr even when I launch it with oculus runtime.

When I’m teleporting with an item out I noticed it makes a noise and vibration similar to holding something on one of the belt bubbles but not putting it there, and when I checked the sitting down thing where you press the top 2 buttons and the belt comes up, my hand was in the exact spot as the right bubble when i was teleporting.

How to recreate: teleport with an item out while yournhand is in the spot the raised belt would be in.

How often does this occur: whenever I teleport with my hand in that spot.

username: 3gg
headset: valve index
controllers: index knuckles
I cant turn anymore and changing the bindings is impossible.
The bindings on the knuckles are also messed up without any way to change them. 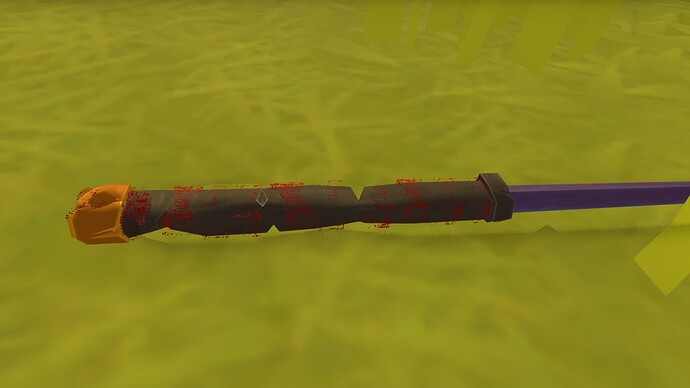 last durability stage of the katana handle looks like this

after update, my controller bindings all gone and also can’t set actions of ATT’s.

It can’t launch with SteamVR after update, so i was changed openXR runtime (WMR to SteamVR)

I have 347 cosmetic items in my collection, and am locked out of over 80 items including the scholar set, ice warrior set, armored mask, poncho set, sorid deathender set, etc. I am on index and its been this way for a couple updates now i think.

The issue I’m having are the bindings failing to work. They don’t show the default binds and the function names, and when you attempt to change/apply them they will freeze your character. They don’t apply at all.

If an item is dropped, it disappears into the ground. This happened with a bow. Also with a drumstick after a spriggel was killed. The feathers from the spriggel kill also disappear into the ground but not all the way. That happened a few times with the drumsticks. The leather from a wyrm kill did not do this. Only the spriggel drumsticks and feathers every area we killed them and my daughter’s bow when she dropped it up in the Dust Bowl by the teleport potion crates. And today is the first day we’ve played since the update. Quest 2 headset and controllers.

Not sure if this is specific to this update, but the orb you have to hit to use the stinger skill (not air-slash) no longer appears.

This is consistently replicable on PC, and in case it matters, I’m using a full Index kit.

LIV app has stopped capturing A Township Tale. Other games work just as before. You can choose A Township Tale as a target for capture, but LIV will just show you a black screen.

Changing framerate while in game results in black screen, having to restart to play again even if you change back.

Spyglass also has the same issue as camera with ghosting items

I haven’t seen anyone reporting this but there is a huge issue where going through the mines or occasionally the forest your stuff will just disappear and if you log out and log back in all of you stuff is replaced by basic empty backpacks. This was an occasional issue before but now its everyday. I admin on several servers and it happens on all of them. I have had to wipe the mines and overworld almost 10 times in the past week and nothing helps. This also happens on completely vanilla servers so I’m not sure what is causing this, if its constantly corrupting chunks or something else, but it is making the game unplayable.

Platform: PC
Headset: Valve Index
there are some strange LOD issues in the mines, as well as an odd mist that didn’t exist before. this is especially noticable in the third trial, where literally all of the awesome views are obscured with a thick black fog, and half the time you move more than 5 feet away from something, there is a horrendous amount of LOD popping visible.