A modular, Samurai-Styled armor, capable to be customized in terms of protection by adding and taking off metal plates.
A full set of Basic Samurai armor would consist of 2 shoulder pieces, an chestplate, two gloves, an armored skirt covering left and right side, aswell as the front and back,
and of course a helmet. without any tinkering, the armor would give little coverage as well as providing moverablity, since it is basically light armor in this blank state.

Tinkering on the Armor:

The individual pieces of the armor can be modified to offer greater impact protection, as well as penetration protection and espacially durability,
by layering metal plates, while simultaneously increasing coverage but also weight, thus making it exhausting to wear while traveling.
The wearer would have a more difficult time moving when the armor is unbalanced in therms of plates.
The plates can be mounted using…

…rope, to later take them off again. This offers easy repairs at any time, but the ropes have a low durability against cutting weapons, talking to you, Wyrm.
This makes the Plates fall off.

…welding tools, to upgrade the armor for good. This strengthens the durability of the armor. Only the most skilled armor smiths may or may not be able to repair it.

Enchanting? (you probably want to skip this)

For this armor to be able to take enchantments, a symbol made out of pure Gold with an gem is required.
This Golden Symbol may strengthen different effects depending on the form it is hammered (complexitiy).
The Gem decides the Element type used.
This Symbol must be attached on the front of the helmet
Enchantments only take effect if a full set of Samurai armor is equipped

Example - Emerald
A golden U-shaped symbol with an emerald in the middle would give the armor some earth-based properties:
Knockback suffered -20%
Armor Durability +20%
Fatique while wearing -20%

Example - Crystal
A golden W-shaped symbol with an crystal in the middle would allow the armor to absorb Magic attacks:
Damage taken from Phantoms -30%
Magic Protection +30%
Healing Recieved +30%

Notice how the crystal example is more powerful since a W-shape is more complex than an U-shape. Thats the idea

Since it is modular, it could be used in a variety of ways.
The main idea is to use it as an Heavy Armor set for Guards.
It could be also used as an frontline fighter armor, putting the wearer in the role of a Tank.
The full armor set is not made for scouting or foraging because of the sheer weight, however,
taking off pieces reduces the weight and offers at least some protection along the way if needed. 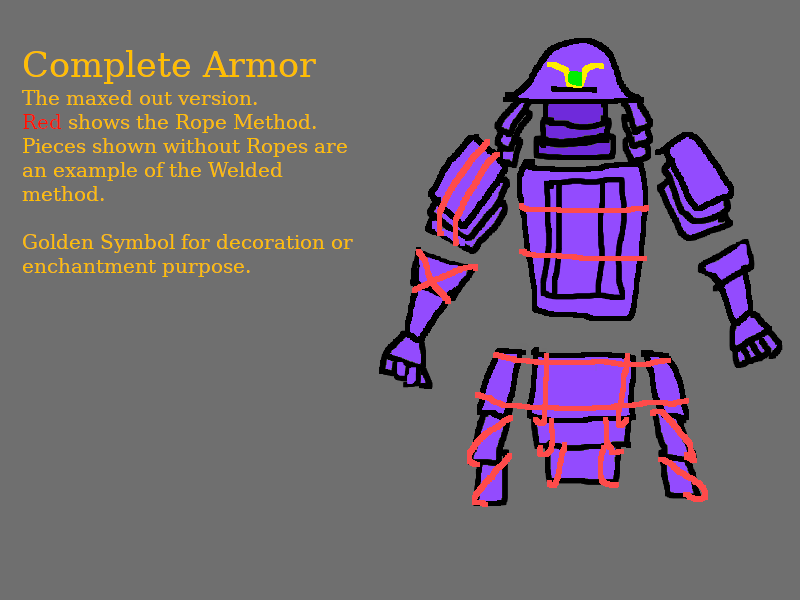 The samurai style seems a bit uninspired to me, but I like the idea of fully modular armor. Perhaps this could be made at the backpack crafting station or a similar hanging hook for crafting.

I like the idea of having different stages of coverage for armor, but I don’t think the “rope vs weld” setup makes the most sense. Looking at the example of the complete armor it looks like you are using the end tier metal as a base, where it might make more sense to think of it with all the metals in mind. Why would someone use the most valuable metal in the game but then cripple it by using rope when they could just use a weaker but easier to fix metal?

I think the different levels of coverage works best as something that effects most, if not all, armors. It easily makes armor more dynamic as you can have players choose how they want to use the armor and what they think needs the most protection, they might have add more metal to their arm’s to give better active blocking, others might have low coverage but use strong metal to protect against heavy attacks (such as those from a club), while someone else might have full coverage with something lighter to protect against weaker but faster attacks (such as those from a rapier)

In my opinion enchanting works best when it’s a system that works with a lot of things in very similar ways but have a lot of different options. So you don’t have twenty different armors weapons and such that have their own special way of enchanting that you have to learn that don’t interact with any other system.

I Strongly agree with this. We have Japanese weapons and, now we should get Japanese armor. I am still waiting for armor crafting.