Basically i’ve found a lot of people just chuck away their bones once they have either cut the meat from the bones or eaten the food, and so i spent several hours running around collecting every single bone i could find that was tossed away, dumped in containers, or given to me by players who didn’t need them. I ended up with the nickname “The Bone Man” as well as 148 bones, I also found that trying to survive on bones causes you to fill up and slowly starve as bones have no nutrition on their own.

Bones have very few uses at the moment and so allow me to throw out some suggestions on where they might have a new use. food: bones are now roastable, on their own they provide only slightly better nutrition than a raw bones, but when added into a stew with normally inedible items or things you normally shouldn’t eat you can get a disgusting but edible stew. things that can be added into a bone stew: apple-core, leather, burnt food, raw poison mushrooms, any bone. eating too much bone stew can make you ill, but as a desperate food or as a way to get rid of things you have no use for.
poison resistance stew: one spriggul bone, one poison mushroom, one glow mushroom, and one coal will give you an un-appetising stew which while not a great food source will cure poison for whoever consumes it and give some poison immunity for a short time, although its advised to not take this due to its filling but un-nutritious nature (this can be replaced with a potion when more potions are added to the game).

crafting: shard-jaws: a bear-trap like device that can be dropped to wait for a creature or player to step on it, once stepped on the target will be stopped in their tracks and take a nasty bite from the jaws, the jaws will break but being made from fairly simple materials they are relatively easy to make as long as you have the crafting skill. The jaws can also be poisoned by pouring onto it a “stew” made from four poison mushrooms, this will inflict poison onto the target when the trap is set off.
Bone Club: a very simple low durability weapon, the bone club is made by attaching many bone-shards onto a spiked club, this ups the damage of the club decently.
large bone club: a large and heavy two handed club, made by taking a babu bone, attaching a medium branch handle, and then attaching multiple spriggul bones. this weapons has low durability but along with being a hefty hitter it also has a decent chance to knock your opponent down.
bone parts: using bones when crafting a new tool or weapon is more for the looks than the stats, but having a sword with a bone handle is pretty cool.

with the idea of players maybe being able to build homes or camps in the future, I can certainly see bones shining there, I can already see the future of using my 148 bones to craft my very own bone-throne, however to cap off my thoughts and feelings on the use of bones: in food, bones should certainly have more uses as in real-life bones can make a delightful and nutritious broth or can be roasted to eat the rich marrow inside, and as for crafting along with simply looking cool bones have been used in tool crafting since the first monkey tossed a rock for fun, I really think having them just be a “trash item” is a bit of an insult to the history and uses of bones, but if you really wont add any legitimate uses for bones, at least add some bone-themed cosmetics so I can at least pretend they have a use

Also yes, I can see the jokes that can be made about my name and the topic, but of course the guy called KomodoBadger would have an obsession with bones

Yes, however for an item so prevalent it has such a limited use, as well as when offered the option players will always pick something better with even copper being a better arrow than bone, now this would be fine as having better options to work towards is great but there is barely an opportunity where a player would have to resort to the use of bone compared to other options readily available, which is why I suggest adding new uses for it so it isn’t such a “junk” item, especially with players tossing aside bones into empty containers or just onto the ground which over time causes a pile-up where players will eventually dump the bones from the containers causing lag from the amount of loose items lying around, adding extra uses will not only stop players filling empty space with bones, but stop them from leaving them lying around to lessen lag just that bit more. Out of the options I stated before, the idea of having traps and similar items made from bone are my personal favourite as it gives bones a use but also allows them to be consumed in one-use tools and consumables so the player will have to make more, giving use to a normally useless item even into the later game but also dealing with their abundance by making them single-use.

Best way to get rid of bones is putting them into loot chests, where they get replaced by loot.

I’d like to add that bones can have two extremely useful purposes once ground down to a powder.

For this to work, we’ll need new tools like a mortar and pestle, and maybe a new building like a mill (which can be used to mill grains and make bread).

Ground bones, or bone meal, can be used as a fertiliser for growing plants. These plants could yield more edibles as a result and/or grow faster.

Bone meal can also be used to create glue, which could be a new crafting ingredient.

To create bone meal, you’d use a hammer to break bones into bone shards (this is already in the game). Then you’d add the shards into a mortar held in one hand, and grind it down to a powder using a pestle in your other hand.

To create a mortar and pestle you use stone, a hammer and a chisel.

more damage and durability than iron 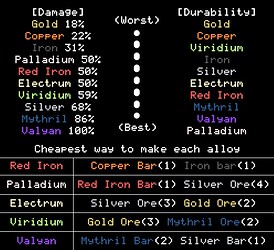 So where does dead iron fall on this chart of metal/alloys?

Also, why would adding brittle bone reinforce iron? How does it fuse together in an alloy process? Wouldn’t molten metal and intense heat just powder the bone to nothingness?

The author Rick Riordan writes about Bone Steel in Norse mythology, but it’s magically enchanted and reinforced by blood, not just bone. I imagine bone quality matters, like using giants bones, and I’m not sure how we would magic-smelt.

I think using bones for handles instead would be a nice choice for aesthetics, and for using bones, though maybe only for small or medium handles, I don’t imagine having 2-3 bones make a large handle would hold up very well, get some bones and some duct tape make a large handle, kinda funny actually, and stupid.