Summary
A machine that will convert a toolhead/guard/hilt and iron into a working Mould!

Core concept
A new way to get moulds, easier than going into the mines but more expensive.

I have drawn a diagram of how this would work and what I think it would look like: 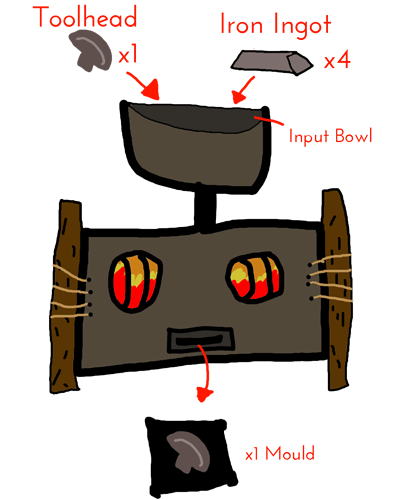 This is how it would work. The user would put a toolhead/guard/hilt into the input bowl, then the machine would use up the fuel that has been placed inside it to fuse these two items together. There would be a small “printing” slot on the bottom that would print out the corresponding mould once the process has been complete. The process can be sped up by using a pump near it.

The reason I think this would be added is because it creates an easier way to get moulds that are not very common but also costs a price to the player and is not free moulds.

I could see this being useful for those moulds that people always hate needing to find each time but what I think this would be really cool for getting moulds from rarer items.

I think this might not be the best idea though, I’m not fully sure but I think the whole world being reset every other week isn’t going to be around latter in development, so it would become a useless feature at that point.

They will always wipe on updates, that’s just how it is with most games like this so I don’t expect that to go away for a long time. Also yes I thought about that. What if you could put say an ironclad in there for a super rare ironclad mould you could sell off to the highest bidder (I don’t think Rare Moulds should stay in the racks and you can take them away)

They will always wipe on updates, that’s just how it is with most games like this so I don’t expect that to go away for a long time.

I think it would at least happen once the game becomes a full release.

I doubt rare models would stay rare when making new ones with just having one would be so easy and not very costly.

I think it would at least happen once the game becomes a full release.

Idk, Rust entered early access in 2013 and even though it is out now still recieves monthly updates and wipes

I doubt rare models would stay rare when making new ones with just having one would be so easy and not very costly.

True, they would lose a lot of worth, But honestly I don’t find stuff like ironclad very valuable anyway

Rust is a different kind of game and that game has resets for a completely different reason. Rust has those wipes since it’s a very PVP orientated game where joining a server that hasn’t been reset in a week isn’t fun since there isn’t really any way to get a foothold with the people that already have guns, unless you are really good at the game.

A rust server a month old is a dead server, so they have to reset.

That’s why server has bi-weekly wipes on Rust. The Monthly wipes are forced due to Facepunch updating the game.

Wipes after updates is generally the easy thing to do since you don’t have to worry about data corruption (or something like it) and face punch has no reason to do it the hard way if the servers are already resetting more often than the updates.

Right now ATT doesn’t have much reason to do it the hard way either expecially since they found away to add a little bit more for players to do because of the resets and because there isn’t much to do. Once we get into the world being molded by the players more in ways of housing and making it so you can’t just wipe everything every time it’s going to go towards not wiping stuff, unless they can find some way of keeping the really important impacts players have made while still wiping the server.

There is also the fact that hosuing will, very likely, give us more storage which we can use to keep extra moulds we find in the mines.

There is also the fact that hosuing will, very likely, give us more storage which we can use to keep extra moulds we find in the mines.

Would that not be for my point? lol. If you can store moulds in your house, people will want to share them and since there is no way to “clone” items you would be able to use their mould to make the tool and turn that into another mould that you could store in your own home

Would that not be for my point?

If people can just keep an extra mould from the mines to take over past the wipe there isn’t much of a need to copy them.

Also, if something like this was added. They may make changes to how moulds work. What if moulds didn’t spawn at all and only the actual toolheads spawned and you had to make them into moulds?

Oh that might be good, it would make more sense to find the tool heads and not the moulds of them. I think that would just make a lot more sense than a near infinite supply of moulds.

What about the quality of the mould created from it being dependent on if the tools is beat up and how much if it is. Would give it more of a dynamic if there was quality to them like that, I could see people hoarding good moulds.

Thinking about it, what if toolheads/blades made moulds one quality lower than the toolhead/blade? So it might be easy to get a lesser quality one, but you can’t just make a mould of the same quality as the one you are using.

ooooh. What if the material you make the mould out of affects the stats of the mould that you get?

Oh that would also be good, Maybe it ties into a durability for the moulds? Though I think this would make moulds more personal property since it costs the player to make them.

I’d say the quality of a copy would never be equal or better than the original mould used in copying it.

So, reverse engineering is actually making a lot sense to be honest, I like it very much.
For some rare items such as ironclad and Lucy or even all bandit weapons, I do understand the concern of making them not as rare as they are now, I rather say this mold making device can only make the molds the current game has available, say you made a sword before update, you want to make a same one but a hand guard mold is missing, you can just dicraft yours and make a mode out of your current guard. Or you found an iron level tool head from looting, and you can make a mold out of it so you can make the rediron version of the same tool.
Because otherwise, if the mold making is way too wide range, people will start to try make a sprigle mold, make a pumpkin mold and such, people will started to stuff all kind weird things in it and eventually bug out the game.
(My brother and I once tried to smelt crystal and it bugged out smelter like almost a year ago…)

You dare say we shouldn’t be able to make a pumpkin mould and then make a gold pumpkin?

Just kidding, of course the moulds would be strict on being only the stuff you can do now and maybe the bandit stuff, I think for true legendary tools/sword there should be more than just it’s shape to make it unique. I mean I’m pretty sure it can basically make an ironclad just without the blue cloth on it, but I might be wrong.

Nah, you are completely right, Edit.
Ironclad is just the 6 bars bastard sword.
All the parts are craftable from guard to pommel.
But they are all just “similar”!
If you compare a spawned ironclad with a crafted ironclad side by side, you will realize the shape and thickness of the blade is a bit different, the details of guard and pommel are bit different, plus the blue wrapping on grip that you have mentioned.
Also lusy, I remember the whole point of lusy to be existed as well as stopped from spawning into the world is because of she was an Easter egg of one of guts’s sword from “berserk” and was a joke between devs but eventually ended up stayed in the game, also she was terminated from spawning because of copyright issue? I assume? But most of her parts are still craftable in game just very different on size of the blade (spawn version seems 1/3 longer) . Also guard and pommel are slightly different on shape and details with the spawn version just like ironclad. Only lucy grip is not craftable, there isn’t a single carpentry blue print looks alike to it.
Also, no golden pumpkin! No! I only want valyan potatoes! XD

NO! We need to make mithril berries and trick people into eating them.

But yeah, generally we should be able to make things that are close to the shape of legendaries that actually are made of parts, such as how we can with the ironclad and the lucy blade.

I hope we get even rarer/harder to get legendaries later on that have special properties.