I’ve been saying this for a long time but we need a new enemy, and not just any enemy, but one that adds to the game and will work with future updated features.

the fields by the camps are just empty. i believe 1 randmom spriggle roams the plains every now and them.
The plains would be a perfect place to hunt this new enemy, which I name “the Borgs”

Please do some research before posting, this has already been said before.
https://feedback.townshiptale.com/t/boars-for-food/353

I saw it after, and it wasn’t really a thought out idea other than “add boars”
also this add far more features than that post.
especially to combine this to already planned features such as armor crafting,
the added location
an enemy name,
and what the new food would be called and how it would work

Then reply to that post with your new details instead of clogging the forum with a new topic.

this is actually better since people will see the full idea in the main topic compared to having to surf through comments to try and mix and match what everyone else has said to get some idea of what’s trying to be said.
this is concise and easy to understand

just a simple thumbs up, thumbs down is needed

It does not matter what you think is better, it has been said time and time again by staff, mods, and the community that if you want to add to ideas, reply to them instead of making a new topic. People will still see it, it’s not like we don’t check the “unread” section. 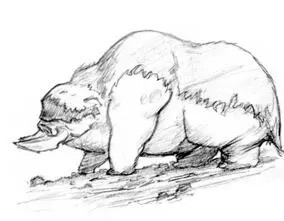 Here is some ATT concept art for a boar made by good old Boramy. Hence why this creature has the nickname “Boaramy”

thanks for a genuin reply Porks,
also it looks like a fat platypus
i was going to work on drawing concept art for my idea of the Borg that will look kinda similar in style to the spriggle

edit: oh i see the tusks now, thought it was a duck bill XD

“Borg” eh? … I think Star Trek might already have had something reasonably iconic by that name …
Boars / piggies is a nice idea though.

It does not matter what you think is better, it has been said time and time again by staff, mods, and the community that if you want to add to ideas, reply to them instead of making a new topic. People will still see it, it’s not like we don’t check the “unread” section.

I mostly agree with this, except that the whole voting for the topic makes it less black and white, either the post isn’t voted for since it wasn’t actually the main idea that the post brought up and so voting for it wouldn’t make sense and the main post isn’t shown to have as many votes, or people vote for the main post and people don’t know that what was added on was being voted for.

If it’s expanding largely on the idea instead of just adding a tidbit it’s fine, but it might be good to see what a dev says about it.

or ideas/topics should be more formulated before posting, as mine gives more room to agree, disagree, alter ideas, and just in general offer more to discuss, otherwise anyone could just go and snipe any topic idea before anyone else and just put in only half a sentence then no one’s allowed to make any detailed suggestions outside the topic, or someone could have a similar topic that addresses a different issue.

This is true, it’s a bit unfair to say no one can make a more developed post on something just because someone made a post on it with only five words, no offence to @Swag.

i do understand the point about if there were a flood of post about the same topic, that was an issue in the discord server.
so i believe there needs to be requirements if you are going to post here. your thought needs to be formulated to a degree and can’t be only a few words.