Can’t get make bag with stone hammer achievement in tutorial built bag twice. Never acknowledged it. A fellow player was having the same problem.:*

Do crafting but no acheiement 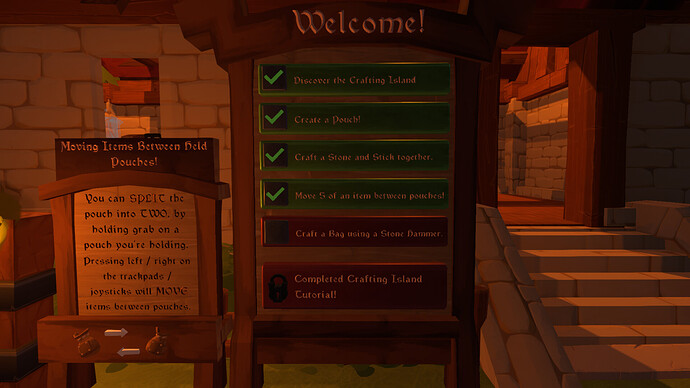 Same Issue here. Tried numerous times on crafting a bag and will not get credit for it.

same issue, let me know if u guys found a fix.

Additional info, was on PC on Steam, on an Index.

Was there a solution? I have same isse now…

I have the same issue crafted 3 times quest wont compltete. I also see no way to skip the tutorial. Any solution would be welcome.

You don’t have to finish the goals to continue. Just got to the end gate and activate it. It’s a stupid little bug, they have not bothered to fix despite the confusion it makes. Doesn’t really give a good impression.

Where is the end gate?

As these videos, will demonstrate, you don’t need any specific portal or otherwise, simply exit the tutorial the normal way through the hand-orb menu.

On the off-chance that I am wrong on that, go to the “meta” area shown in the videos, as well as the info island to the immediate left when entering tutorial island. Press the hand plates to ‘sign’ that you understand. Those should offer some explanation or toggle for the exit/finishing the tutorial.

But I’m confident that I’m correct, since 1 update back in August was intended to specifically make the tutorial optional.

Tbh I’m really not sure what @cannonfather is referring to by an ‘end gate’. I didn’t see anything like that during my tutorial 3+ months back. There is also no mention of ‘gates’ or ‘end gates’ on either the wiki or through Google.

Though why do that and not just fix the problem which continues to confuse everyone is beyond me. They seem more concerned that we have a merch rotation than a game…

I mean… they literally released an update the other day that fixed MORE important bugs…?
Now people can’t steal out of your backpack when you’re not wearing it, AND people can’t put lit TNT in your pockets. Those were a BIG deal for the new players AND experienced ones.

So really it boils down to priority and which bugs impact the most people. While optional tutorial isn’t a fix, it is a bandaid: you can learn everything in tutorial still, and exit whenever to go join MP, or just skip it entirely.

Consider: would you rather have the tutorial tell you it’s done (serves 0 purpose currently), OR not get blown up from pocket TNT/your backpack is a thief free-for-all?

The cosmetics are probably really really easy to make on top of that, and it’s not like the designers have much else to do… no point designing magic attacks when magic is years later. They probably duplicate clothes and re-style them, pretty much cutting out 1/2 the work. And no, don’t ask the designers to code, that’s what the coders do lol.

Since the game is free on PC and $10 on Oculus, the cosmetics are actually Alta’s primary source of income. So it’s critically important to the survival and longevity of the game. Gotta keep the bills paid and the servers running, y’know?

thankfully this tutorial glitch is NOT game-breaking, just slightly frustrating. I’d imagine ALTA will prioritize it once the big glitches are dealt with.

Edit: Between the responses before this and after, apparently cannon can’t read… Complaining about Alta giving us “merch” cosmetics when the designers making the cosmetics have absolutely NOTHING AT ALL to do with debugging code. But no, the devs are prioritizing merch rotation?

I don’t get it. What does art have to do with code?

If the tutorial checklist glitch is so easy to fix, why wouldn’t they fix it ASAP?

Chill man, you seem a bit defensive there. While from a 20/20 hindsight perspective, it may seem silly to you, but from a noobs perspective where you have no previous opinion, your first impression of the game is going to decide whether you keep playing it or not. Something like this leaves a negative stain on the game.

Regardless, the issue is a matter of setting a quest flag to be set, not a deep dive in to the guts of the game engine. You would have a hard time convincing me that’s a hard fix, when more difficult fixes can be had.

It’s not whether the problem is game breaking or not, its whether it leaves a good impression or not. which it doesn’t. It could very well be hurting them for a player base when the first thing they experience is broken. If they are trying to build a bigger player base (=more future income) then they should make sure that the first thing a new player encounters is not confusion and irritation.

On PC. Rift S. Unable to join a friends server, create my own, or do anything in the game until I complete this ridiculous tutorial. It sucks because I (foolishly) purchased cosmetics already, yet can’t even play the game.

Have to finish the quest

No you don’t. You need to read the posts in the topic before responding…

You don’t have to finish the goals to continue. Just go to the end gate and activate it.

As these videos , will demonstrate , you don’t need any specific portal or otherwise, simply exit the tutorial the normal way through the hand-orb menu.