While playing I came across a player that had a semi-transparent skirt. This skirt was visible (not gone) and looked like glass, and still and colored embroidery painted the normal colors. You could basically see through the player’s skirt and still see the skirt.

When confronted and asked where they got it, they said that it was an old cosmetic. However, doing further research there are no items listed in any of the past rotations all the way back to the founder’s belt cosmetic. They were hesitant to tell me more, however as per usual I record every exploit/glitch I find.

Video has the player’s name and the cosmetic in question.

@devs I have the video posted in my YouTube channel unlisted but available to view upon request.
DM me if you would like the link to the video.

I have an older cosmetic skirt that is mostly transparent. I’m not on my computer to take a picture of it but I can vouch for its authenticity.

I haven’t seen any record of it on wiki or any documented cosmetic that was released. If there is a photo within the launcher that someone could provide that proves it’s not a glitched item, then I would be more inclined to belive it isn’t glitched.

Here’s the skirt I was talking about. Is this what you saw? 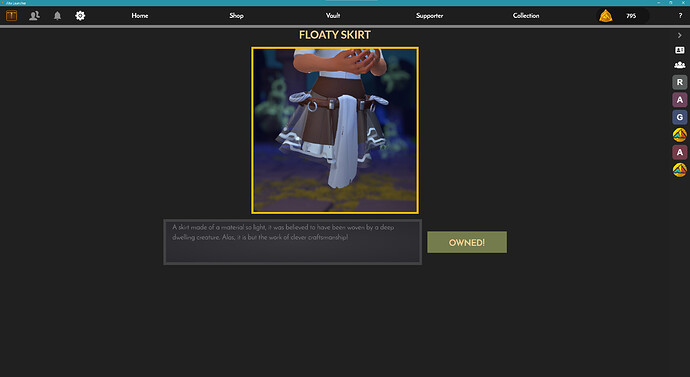 Okay yes that’s it. It’s super cool for sure. Wonder why there’s no record of it.

The wiki is kept up by volunteers and not the game artists. They could have missed it or not have it.

That’s true, still that makes me wonder what other cosmetics are out there we don’t know about now lol thanks for your help