Summary
A primitive pistol that is fired by bashing a flint into the weapon to manually ignite the bullet inside to fire it.

Core concept
Now, hear me out. I know you all hate the idea of firearms in this game, but this weapon would be a single shot high damage weapon that is more of a last resort than anything else. Crafted with wood and ingots of your choice (and potentially gunpowder if that was added to the game) you would create a small pistol, much like the EOKA pistol for any of you gun maniacs out there (https://guns.fandom.com/wiki/EOKA_pistol). 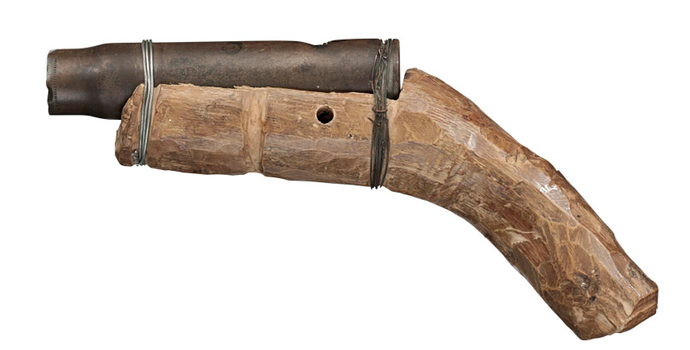 eoka.jpg1656×840 192 KB
The weapon would be fired by bashing a piece of flint onto the metal part of the gun, igniting the gunpowder in the bullet inside.

Remember, this weapon would be a last resort and wouldn’t be useful more than once as when you use it the weapon will break and be unusable but would make the combat system a lot more varied and interesting as you have to evaluate if the enemy has one or not.

If a simple firearm like this was added, I wouldn’t mind it not only being as last-resort weapon.
Simple ball shot craftable in the forge. 5 shots per 2 ingot - same as arrow heads.
A way to break dynamite apart safely so that you can collect the black powder, and collect it in a gourd (in place of having a proper powder horn).
Then you’d just have to load some powder, drop a shot in, then bash with flint to fire. Maybe a 1 second delay / fuse so people can aim once the spark has been struck.
Short or long barrel options in the forge. Long giving more punch and accuracy, but would be more cumbersome to reload.

Maybe it could malfunction and not fire and you would have to strike the flint again. Maybe make it random chance

Same as starting a campfire, not every strike of the flint creates a good enough spark, but once it lights I think it should be guaranteed to fire.

Hell yeah, that would also allow you to play Russian Roulette haha

Sounds like fun to be able to craft guns.

The overall idea of this is good, perhaps eventually after doing some research we could craft up a musket/flintlock/blunderbuss that has the more complex and advanced mechanism than just smacking it with a rock.

I don’t know, in the main post he mentions that it’s not suppose to be a good gun since “I know you all hate the idea of firearms in this game”

Now, hear me out. I know you all hate the idea of firearms in this game, but this weapon would be a single shot high damage weapon that is more of a last resort than anything else.

That being said I understand where you are coming from, I feel like this idea feels so undeveloped, like if we had only one handle and one blade.

It’s a tough spot because if it lets you get a better version, that is just adding guns to the fantasy game, and on the other hand if you leave it as a small primitive thing, it just feels like an after though in the game.

I feel like since we know how to use the forge we seem to be kind of in the era of fairly basic powder rifles like flintlocks and blunderbuss’, i certainly see where you are coming from though.

Well knowing how to use the furnace is far from the technical point of being able to build one, much like dropping a furnace in an undeveloped tribe, they may learn how to use it, but they are still going to be far from making guns, more so since guns are a straight progression, like how VR came out when we had more than enough tech to make it, it wouldn’t have been as good if it came out a few years earlier, but it still could have.

There is also the fact that many settings where magic leads to a stagnation in technology since the population relies on it instead. “Why make a gun when you can get the same effect with magic” kind of logic, though more “Why mimic magic when we have magic?”

I feel like some people (maybe me) would just have a backpack full of those and go super mcshooty with them. Disposing of them as you spend them.
Would be fun.

Fill up two backpacks with them, put on on your back, hold the other and use your open hand to shoot, for extra ammo, get someone to carry three backpacks full of them.