Se here’s the idea: Somewhere in multiple locations on the map is a respawn shrine that you can set your spawn at. Just place your hand on the pedestal and the entire thing lights up, showing that your spawn has been set. This is so that you aren’t always spawning on that wooden platform. Plus, it would make respawn if a lot more magical, like you’ve been reincarnated or something.
Here’s the shrine for reference: 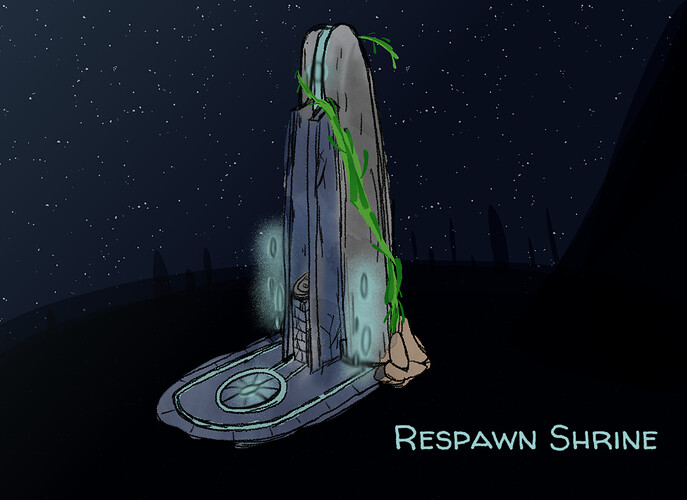 These shrines can be found all over the map like near the Mines or in the mouth of the cave in the Dust Bowl. To deactivate the checkpoint, put your hand to the pedestal again and it’ll make a sound telling you that it has been deactivated.
This idea is mainly for those who end up dying to some monster. This’ll make it so that it’ll be easier to get back to your stuff or get out of bad situations. Any thoughts?

This is a really really nifty idea, and ties into the careers kinda too. But I feel like for the convenience, there should be a cost, but I don’t know how that could work. It’s not like your standard televator: you died, so you have nothing.
I’d say tax XP, but ew. Maybe use the deposited bank coins…? Or a new system with gems SIMILAR to the bank, purely for checkpoint respawns?

With xp, of course not. Bank coins? That would ruin the magic aspect wouldn’t it? Gems are magical but not readily available. Especially for worlds that have crystal problems (My main world has that problem). Since we ourselves have magic in our theoretical blood then simple activation is best.

Or even a tent roll that you can carry out and set up somewhere with some minor conveniences instead of having to return to town every single time.

Nah, a tent roll is for sleeping. And since this is a multiplayer server, a tent roll would most likely be used for speeding up time rather than setting spawn.

Adding to chill’s point, I don’t think he intends for EVERY shrine to be in town. Probably 1 around the camps, 1 in the mountains and 1 in dust bowl or something

magic in our theoretical blood

While this is cute, if we are to reference both fantasy and real world magic, they require more than just the blood of a caster.
Take satanic magic IRL for example: black candles, symbols, alters, words of power, group/ritual casting, commanding demons, human sacrifice(PSA: not actual killing, just death of a bad part of a person to banish X.), etc. you don’t have to believe it works yourself, but there are books you can read on the subject, like Anton Szandor LaVey’s “Satanic Bible”.
“White magic” uses animal sacrifice in place of the human, so they are using blood/death energy, while Satanism says it’s more important for the caster to be in a state of strong emotion, and project magic from the self. With the aid of supporting components, of course(sage, candles, incense, black robes, minimal light)

In a less exotic example, dungeons and dragons breaks magic down into about 7-8 designated magic ‘classes’, and within each there are different rules: bards can play an instrument/sing/use words of power, a wizard refers to a grimoire (book of spells), a sorcerer calls upon innate magical power gifted from the universe, etc. however in all cases, under normal circumstance, spells have other requirements:

Certain classes gain the innate skill to use specific magic without the requirements, but that would be the equivalent of using a Township Tale skill slot for using checkpoints… ick. Even if they made a new slot wheel for magic spells, ick, probably WAAAY better choices.

So, all of this said, I think just permitting users to innately use checkpoints detracts from the power & value of magic. And it lets brand new players use checkpoints when they have minimal magic within them/nothing to offer the shrines.

Rather than require a specific skill or spell to use the shrines, I would think using ingredient components and gestures (hand on rock) would be more than balanced for setting a checkpoint. Using your Crystal example:
Pull 1-25 crystals(depending on scaling value of shrine distance from town) from bag in 1 hand, shake like firebug to glowstick charge the crystals, smash crystals hand into ingredient intake, hand rock glows a ‘ready’ color, and anyone can activate it(or the activator only if that’s preferred, but I assume people would like to cover their friends cost & easily demonstrate it for others…)

Ok, so the reason I said “magic in blood” is because somehow we can activate shrines by simply placing our hand onto a pedestal. Perhaps there’s gotta be some outward explanation maybe it’s the fast growing food or the ability to draw essence from others by killing them and gaining experience (Like the Minecraft soul energy theory). Whatever it is, we can operate magic on our own. Lore!

I’d imagine the stones themselves are the magic in this case, or logic might dictate. The purpose of a shrine is focusing and sometimes storing energy, and with the prevalence of crystal inlay in a rune-like pattern suggest the shrines use ancient magical technologies.
The skills obtained are a very limited form of player’s magic, more-so when true magic is introduced. I would assume like every other skill tree, magic will scale with use.

Lemme ask this: if we have magic in the form of being able to make a carved hand-stone glow with rune-like energy, why doesn’t that energy take any other simple form(s)
Are we also magical to the point that we are summoning a pocket-realm in the town hall with the little storage boxes?
I don’t think so, cause if we’re that magically potent, then we’ll be using dimensional teleporting and other major magics.

The teleporting mechanic for those who get motion sick? We can carry a pocket dimension worth of items in your hot bar. As for simple forms of magic, Spreegulls can pop into existence (spawning) and plants can grow at unnatural speeds. These are all game mechanics I know!

kind of a steep price but what if you lost a bar of health? permanently until you get another heart fruit to replace the lost health bar.

Great concept! The crystals seen hovering at the side could be harvested to craft a sort of wall panel that can be set up to make custom rez-points (Kind of like a bed). The panels could be activated by (again) placing your hand on the panel, and the panel would break after 3 respawns on the panel. The recipe would need to be a bit expensive as custom rez-points seem like a bit of a luxury, and the shrine would be an infinite source of respawn points! Also, make the hovering crystals a non-renewable thing, so custom rez-points are a one-time luxury, found only at the shrines or (maybe) very rarely in sets of 1 in oak chests.

Hear me out, what if when you die, you find yourself in a strange void-like area with 2-3 portals surrounding the area: one to normal spawn, one to the current permanent shrine you have activated , and (if implemented) plasmaticus’ idea of a buildable spawn point. This of course could be simplified with gestures and would probably require like a time limit of 60 seconds to stop players from camping but I feel like it would provide more freedom when traveling after death/when using a teleport potion.

that still gives some challenge to it being obtained ( cause this looks amazing but more as a late game item ) maybe have them in more spaces the more you unlock the world and repair other respawn point ?

that you start with 3 you can repair and when all 3 are repaired it spawns in a couple others near other spots that eventually you got them:
at the mines
at the dust bowl
at the plains
at the climb tower
at the forest
and such but that the areas are grouped and need more material for them to be repaired maybe ?

that the first one takes stone only
then the next 2 or 3 take stone + gems
the next take more stone and more gems
that the futher they go the more expensive they become to be repaired ?