I did a post about cosmetic about a year ago and decided to make revamp it! These are facial cosmetics that I believe could make a smooth entrance to Township along with contacts! Edit 3 and 4 are a bit more loud to Townships art style but I feel if they were dimmed down a little they might be a bit acceptable, but these are just concepts for ideas and building off of. Leave your thoughts below. 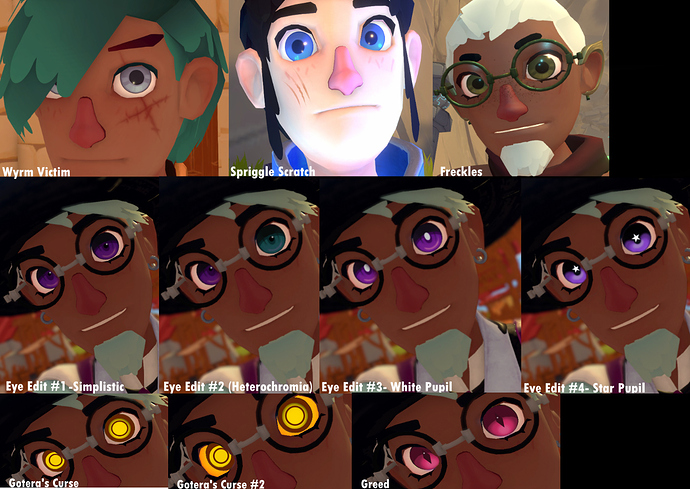 I like the scars and freckles, but I’m not too keen on the eye edits. I think ATT characters should look like real people, not vrchat avatars. Also, very good job on the edits, I could barely tell they weren’t real.

And like what @Zebulaun said, mainly on the last two eyes it’s a bit too much into that realm of overly customized VRchat avatar kind of things.

It might be cool to have some eye alterations that are tied to things in game (I think they mentioned a spitballed idea of a town wide curse that is kind of like vampirism, which could look real cool with some altered eyes that make them looks sharper) but even then the eye stars wouldn’t really fit.

Edit: I was sure this was talked about in some depth in an Altacast or two and I was able to find what I was looking for.

I set the link to go directly to the related question for ease of viewing.

The response to this question tells about how they don’t want to go over board on cosmetics to keep player’s humanity in a way, not exactly on cosmetic eyes but ones with symbols in the middle would be pushing it in my opinion.

In this video they answer a question similar to the first, but is on more inhuman “cosmetics” that are from things in game, which they respond to positively.

Ironically I think I was the one that posted both of these questions, I know I did for the second one, but not 100% on the first, but Joel saying “It’s a long question” is pretty telling.

In my honest opinion I would 100% be down to have something like this as a buyable cosmetic, regardless of if these seem “unrealistic” or anything of the sorts, what matters is that they genuinely look cool. If these ever showed up in the item shop people wouldn’t think “ooo not real enough”, they’d probably wanna buy these in a heartbeat, especially the Gotera’s Curse looking ones. I would love to see something like this in the game.

Looking cool should take a backseat to being thematic with the game.

I should preface this with, don’t worry most of this reply is me going off on the idea of how the last two eyes could be added into the game inside of it’s systems.

Well again, the devs have said they don’t want a player to look inhuman through cosmetics (Which you can see in the first video I linked to).

And it’s not that people wouldn’t buy it, that isn’t the problem, it’s that after people buy it you end up with a bunch of people that look inhuman running around the server and it would detract from the experience fitting into the lore and feel of the game, at least that is what the devs think it would do.

But the devs also sound very interested in the idea of these things being possible when naturally playing the game from things like curses or blessings, which could work well with the Gortera’s Curse one and the Greed one.

Imagine you’re in some kind of boss fight against some elder gortera and you lose to it, for your failure in such an important battle you respawn with the curse visible in your eyes, it makes it very hard to cut down trees and makes you do half as much damage to normal gotera (maybe some kind of buff on the side to make it more interesting than just a debuff, such as gotera starting neutral, since you aren’t much of a threat), to remove this curse you either have to gain favor from the elder gotera (Oh it would be cool if you are tasked with protecting a valuable tree, with consequences for failing, either that your you could gather a better party to challenge the elder gotera.

The eyes that show your curse could be the #2 version and after either doing either things that would relieve the curse you get the option to keep a more beneficial version of it that (which has the #1 version of the eyes) eases a bit up on the tree cutting debuff, damage to gotera debuff and gives you another boon (but if you abuse it by cutting a ton of trees and killing a lot of gotera it’s revoked or maybe reverted).

As for the greed one it could be tied with some blessing/curse for having a lot of gold, which could be maybe at least 10k? and be in the top 1% of wealth holders of the server. It’d be optional, but those that accept it get a variety of perks, such as coins and gold appearing to glow to them, (if that is too hard to do client side, or poses too many risks of people exploiting it, it could just make coins and gold near the greed marked player) and they could have luck with finding coins in loot (doubles coins in a chest that hasn’t been opened since it reset maybe?), but along with some other debuff, this could be tied directly to the amount of coins the player has on them, so the more they risk, the more they stand to gain and if it’s a no item drop server their coins drop anyway since it’s important for it to work and they accepted the curse.

There could also be a different similar variant that is just to show off that they meet the requirements for the greed mark even if they don’t want it’s burden.

I like the idea of eyes representing a supernatural state of the player. Perhaps even a curse-type affliction that lets other players know who has the “vampire blood” and can’t go out in the sun or whatever.

I think that’s the cool part of restricting those things (more extreme eyes/anything really inhuman) to stuff that happens in game, it gives some parts of appearance meaning, if you know you can get really creepy eyes from some cosmetic seeing someone with creepy eyes means nothing more than they might be kind of edgy, but the emotions you’d feel seeing someone with creepy eyes when you know there is some kind of meaning behind them would be really cool.

“I have no clue what pitch black eyes with a red glowing x in them means, but it can’t be good, I’m going to run, fast.”

Same with more blessing type visual effects, if you know you can’t get anything truly wild from the cosmetics and see someone with some halo or glowing aura that makes it all the more powerful that they did something cool to get it, and there is an actual status symbol in those effects.

Sorry, I get too excited thinking about what could be done with this, I should probably make that idea post on blessings and curses that I swear I made a while back.

I do like and respect the concept of looking as humane as possibly unless tied with lore of course, but I do find the two pupil styles tasteful and acceptable enough since it was just a small tweak to the pupil and of course my general art style.
Township in their art style is a bit more flat color and don’t really touch highlights especially with the eye itself due to game lighting constantly adjusting. It still is a game in a old timey fantasy world with walking trees and magic bow skills so why not a small star pupil especially with the lack of a selection. If multi color hair can slide too as not too vrchat like…

Honestly I didn’t notice the differences of the Simplistic eye edit until now, I wasn’t looking at the eyes in the first three pictures so when I started looking at the second row the first edit just looked like default in my mind.

I actually like the more simplistic look compared to the two defaults, though I think more of a mix would work. The default looks maybe a bit too bland, while the simplistic edit looks maybe a bit too cartoonish and might look weird in different lighting since it is very dark towards the top and brighter towards the bottom (very much so with edit #4).

Township in their art style is a bit more flat color and don’t really touch highlights especially with the eye itself due to game lighting constantly adjusting.

Hmm, there could possibly be something for at least the eyes that give it three textures, one with it all being highlights, one with all low lights and one with no highlights or low lights so the game could dynamically change it in game where more diffuse light (not in a dark area but not looking at the sun) could bring out the normal texture (so the edges that are lesser lit could have the low light) and something bright like the sun, a lantern moderately close or a crystal very close would bring out the high light.

I’m sure there could think of a better optimized system that still works for it, but then you could have general highlights without it looking weird when you look at the sun for example.

There is a clear distinction between a generic fantasy setting and absurdist anime shounen fantasy, not to sound rude. It’s more of the difference between fantasy that builds on itself and more fantasy that is more about what looks cool and “fantasy like”.

It’s kind of hard to describe it more clearly than that.

why not a small star pupil especially with the lack of a selection. If multi color hair can slide too as not too vrchat like…

I think the mulit color hair is pretty conservative in the aspect of looking “vrchat like” (for a better word) since it’s a lot easier to see townies being able to dye part of their hair (although with a bit bright colors) than it would be to townies to change their eyes.

To put it better, eyes with stars in them look a lot more special/inhuman than some hair with two colors, almost futuristic.

Also generally I think with the thought that eyes could be used in something like what is mentioned in the Altacast it’s better to have the eyes blander so that it can be incorporated into things in game that change them, for example how you could have blue eyes and then get some kind of effect in game that gives you night vision in game and makes your pupils sharp looking, the blue can be incorporated into that, while something like the stars would have to be overridden.

Again it’s a hard concept to formulate, something about star eyes (and most eyes with symbols) that looks very foreign, but not in a way that looks really fantasy like, it feels like it’s own genre of visual that is more like customizationism like vrchat, which still isn’t that good of a descriptor, but it’s the best I got.

Still going for more of that simplistic aesthetic for the eyes could be cool.