For a while now, ATT has townsfolk of all walks of life, but one thing resonates with them all; THEY ARE ALL BETTER THAN USAIN BOLT! The ATT townsfolk could pack a few panda express orange chicken bowls and run across the world without getting tired. In my opinion, we should start working on a stamina system that will make the game more immersive and logical.

Now, some may argue that “The saturation bar is your stamina”. but the saturation drains too slow to work as a stamina bar. Instead, we should have a blue bar that drains as we do difficult activities (Chopping wood, mining rocks, swinging swords, etc.)

Now, there is a curve to this system, as some aspects are a bit underlooked in other games’ stamina systems. First of all, most swords we make are huge breaker blades that probably weigh 90 pounds IRL, so you would have to follow the “Flow” of the sword. If any of you watch “The Book Of Boba Fett”, you can probably tell where I’m going with this. When you fight against a sword, like using quick slashes with a heavy sword, more stamina will drain, But if you match your slashes with the current inertia of the blade, there will be less stamina taken and you will be able to fight longer. Smaller swords can do quicker slashes, big swords do longer, slower, but heavy-hitting slashes.
Another curve to the system is that pulling back a bow should drain stamina depending on the material, with metal being the most and birch being the least. (I’ve pulled back a bowstring in boy scouts before, and it is NOT easy.)
The final curve is that when bending down to pick up an item, at least SOME stamina will drain. For people with accessibility docks, just calculate hand distance from the object, and subtract that from the stamina bar.

Now, unto the normal necessities. Walking drains stamina, running drains more, and drinking water will restore some stamina. All foods will also restore stamina, with fruits, meats, and berries restoring more, since they are juicy and rich in vitamins, minerals, and proteins.

Maximum stamina can be increased by finding a zapflower, which is the exact same thing as a heart fruit, but it gives stamina. 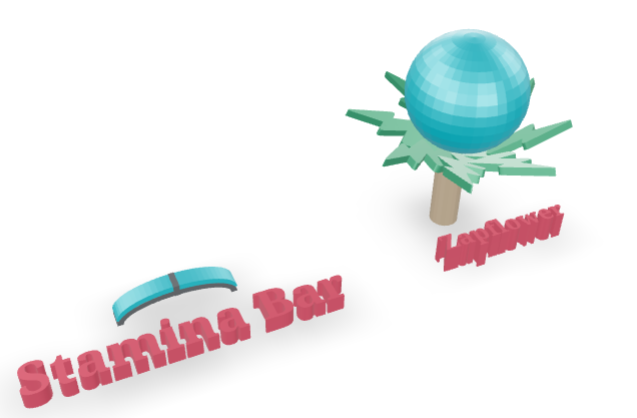 I don’t mind the idea of stamina mechanics, but 2 things I would debate is “Walking drains stamina” and “bending down too pickup items drains stamina”.

While walking draining stamina is realistic, it wouldn’t be very fun to get stuck in the middle of town without being able to move or do anything, and walking is slow enough that having no stamina drain wouldn’t affect balance in other places.

As for Bending down to grab items, that would just be plain not fun, cause that already requires my REAL life stamina to do! XD. But besides that, I don’t see it adding anything besides a minor nuisance to the game.
I feel like stamina should only drain for doing things above and beyond basic movements. Similar to other games, that way there’s a trade off for doing things quicker/easier, rather than it being a punishment for just playing the game. It’s already a chore for me to go around picking ore and wood off the ground, without being artificially limited.

However for mining and such, I think stamina mechanics could give more validity to the perks at the shrines or offer new ones. Since being able to mine using less stamina, or forge faster (Therefore using less) would be an actual perk, rather than simply saving you a couple seconds of work.