Tea
Tea, the staple of British refreshment, made with boiling water and the leaves of a plant(tea).
This could be transferred into the game with a new plant/shrub that grows pick-able leaves, mixing these leaves into a cauldron of boiling water would make a brownish liquid somewhat akin to this: 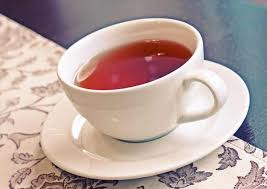 This liquid could be used as a base for soup, and have similar affects as adding salt or garlic, or it could be drunk on its own for a hunger boost, and a strength and possible speed boost.

TL:DR
Tea plant makes leave, pick them and put in boiling cauldron to get tea, which gives strength and speed boost, or use as a base for soup.

My opinion, if there going to be coffee and tea in game, they should be some certain kind energy boost as mana or magic (once something alike added to the game.)
Something refreshing, wakes you up and make you more focused, should be good for mage or such.

Cool idea, but tbh I think we should be able to make stocks with spriggul and veggies before adding new plants.

@KindredSpirit, we do have certain food and dish as using salted tea as juice or soup in many Asian food culture, there a few examples as tea egg in China, ochazuke(tea rice) in Japan and bak kut teh(pork bone tea) in Malaysia and Singapore.
Not sure about other places and food cultures.

I think it would be cool to produce a lot of dried tea leaves and, as a merchant, move them to somewhere I could sell them for more, but I think if it was by boat the urge to throw all of it into the harbor would be too great.

lol, Rival merchant hires people to infiltrate the crew an toss it into the sea.