Before we get into this, the idea of a cartography system has been around for a long time (The ones I found are here, here, here, and here.)

This idea will put those four (as well as some ideas from the discord) ideas and their replies together into a nice little package embodying what I think the hypothetical cartography update should look like.

Compass
I believe the compass should function identically to a compass in real life, it points north. Some ideas have suggested that the compass directs itself toward points of interest specified by the player using it. I think that this would make navigation boring and easy, as well as leaving lots of room for issues regarding whether the places the compass points would be specified when the compass is used by a certain player or are unique to the compass. I also think it would be cool to be able to mount your compass on certain items, like handles or on top of your map tube (we’ll get to that). Compasses should be made in the crafting house using metal, glass (heres an idea about crafting glass), and a rare new metal, magnetite.

Handheld maps
Handheld maps could be made at a new cartography table present in the building that currently houses the mining book since it isn’t being used for much right now (a new building would always be nice, though). They would be made with paper and would be able to be filled out using a feather quill and ink (heres an idea about crafting ink/dyes).

Filling out your map
Like I said in the last section, maps could be filled out using a feather quill and ink, this idea shows you how to craft ink, and feather quills could just be a feather dipped in ink (perhaps once township’s technology is a bit farther along we could get proper pens). When you make your map at the cartography station in town, it only has the area on the map that contains the cartography building. The way you get the rest of the land on your map is by going to each map board around the lands of township. Once you are there you can fill your map out with the area the map board covers. You can do this using a small tray mounted on the board with slots for the map, and a bottle of ink to be set down. To fill it out, simply dip your quill into the ink and scribble around the map until you see a spark (similar to one you get when cooking and doing carpentry).

Here is an image detailing the map tray 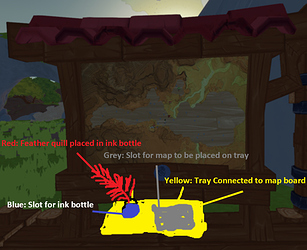 Mapping out the forest
I’m including this section because any seasoned cartographer will want to take on the challenge of mapping the massive procedural forest to help other adventurers find their way. I think the forest should only be able to be mapped once the map has been fully completed. The way you can map out the forest is by travelling to each major point of interest in your forest and marking your map freehanded (without a tray) or with a portable mapping tray (we’ll get to that too), these can include tura domes, rock towers, waterfalls, wells, redwood groves, and kolmui ruins.

Accessories and Storage
1. Mapping tray
A portable mapping tray is an item you can use to help map out the forest (as well as other areas not covered by map boards in the future), this device would be a mapping tray with a crank poking out of the side that you place on the ground like dry grass, and crank it to unfurl legs that give you a relatively high mapping tray that you can use instead of freehand mapping. This item would make maps of the forest (and other areas not covered by boards) higher quality than ones made freehanded, since the user would have a hard surface to draw their maps on. It would be relatively hard to craft, requiring many metal buckles, wood wedges, metal sheets and a leather strip for the crank handle.

Here is a very crude image representing how the legs would unfurl when the device is cranked. 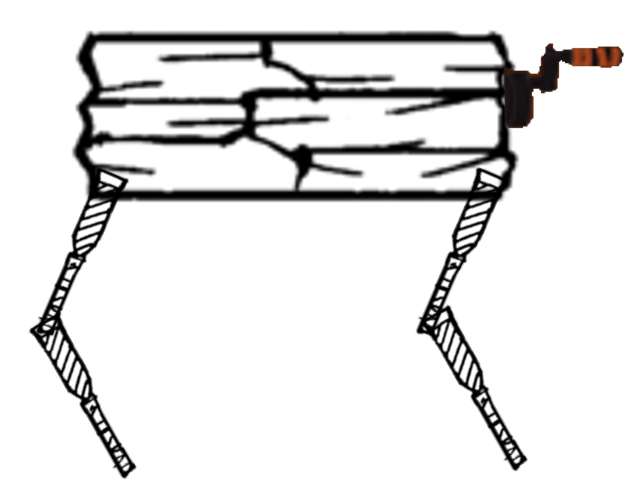 2. Map storage tube
All this mapping gear would end up being a lot to carry, right? Well what if there was a storage tube that can be used to hold 1-2 maps, a bottle of ink, 1-2 feather quills, and mount a compass on the lid for easy access. It could be mounted on your backpack, taking up two accessory slots to avoid being too overpowered.

Edit: Printing Press and Stamps
I made an idea a long time ago about these two things, but it was pretty wordy and could be applied here, so I figured I would rewrite it in a way that fits this idea.
1. Printing Press
A printing press would be a machine that can be used to copy books, posters, pamplets, etc, but most importantly, maps. This press can be loaded with ink and used to copy an original map into as many copies as you have materials. However, copies of an original map could not be copied again, in order to preserve the economy of cartography (of course there has to be an economy in the first place for cartography to have one). There could be the issue of identifying copied maps from the original however, which I think could be remedied by copied maps having a symbol on the back of them signifying that the map is a copy (something simple but easily recognizable).

2. Stamps
Stamps are another item that would have applications outside of just cartography (books and other paper goods). The stamps would have 2 variants that are crafted using the carpentry bench, the first variant being a stamp with a circular bottom, and the second being a stamp with a square bottom (pictures representing both are below). Crafting a stamp using the carpentry bench yields three stamps. Once each stamp is crafted, they would have to be engraved using a new stamp engraving machine. Stamps would also require a map tray to apply, meaning that to use stamps in the forest, you must have a portable mapping tray. 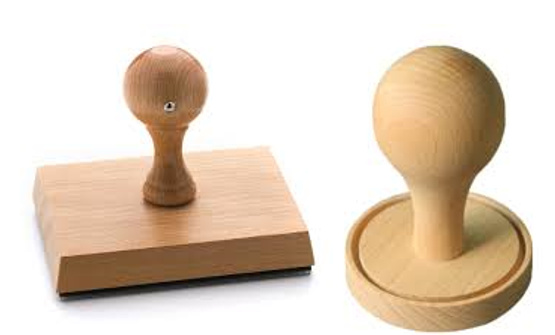 3. Stamp Engraving Machine
The stamp engraving machine would be slightly larger than a coin press, and would have a spot to insert the stamp, 2 slots to insert different shaped engraving modules, a crank you turn to engrave the stamp (like those pressed penny machines you see at theme parks), a window to watch the inner mechanism and gears engrave the stamp, and a tray for the finished stamp to get spit out into. The engraving modules would be cylindrical or rectangular prism shaped metal pieces with a representation of what symbol it will make on the stamp. These symbols can range from a plant symbol that signifies where a certain herb grows (idea about herbs) to more general symbols like stars, skulls, or treasure chests. To operate the machine you simply select the module you want your stamp to become (there could be a rack similar to the mould rack to store these), place it in the correct slot on the machine, place your stamp into the machine, and rotate the crank until your finished stamp gets spat out into the tray on the other side of the machine.

Here are some pictures representing the stamp machine and a stamp module that I spent way too long making. 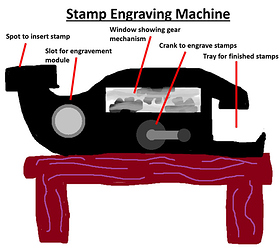 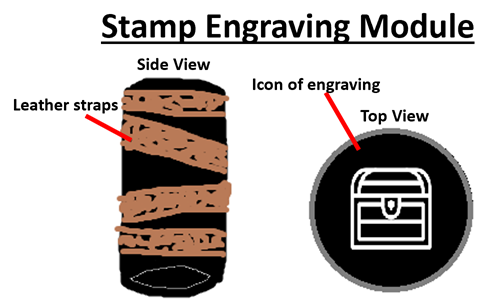 I think it is a great idea to be able to map out procedurally generated locations such as the forest or mines, but I think that the tray idea could use work.
The tray would take up precious backpack space and not be used often, it would also add a great amount of weight for this trade off.

The tray would be more of a novelty for cartographers who want their maps to be as high quality as they possibly can, and really I don’t think 1 backpack slot is much to ask for something that drastically increases the quality of your maps, considering that everything else can be stored in a map tube, leaving a full 9 slots at your disposal.

Edit: I didn’t see that at first, but I have to say I don’t think the mines should be able to mapped, the whole point of them is to not know where you are going.

On the issue of map items (tray) taking up valuable storage space, isn’t that what ALL items do? If being a Cartographer is a full and valuable vocation then it’s no more issue than a miner carrying a pick-axe or a carpenter carrying a chisel.
For an adventurer/scholar/wanderer type of player, this could be really nice! Good idea overall.

Hi everyone, I just added a big update to this idea so I though I would reply to let you all know about it.

great update on your idea!

Can imagine how cartographers create unique maps for different uses and sell them to players. Could also work with quests. You make a map with stamps to show where to do your job.

Things like quest usage are why I like the idea of stamps so much, you could use it for so much, although for temporary things like marking where you need to go, perhaps metal pins would work better than ink stamps, seeing how they are less permanent.

Do you consider map making / cartography / stamp making more like a type of crafting or even a profession?

It really depends on how it’s implemented, if it were added exactly like how this idea says, it would definitely be a profession, but if it were just the ability to draw a map without any of the fancy gear, I would consider it to be a type of crafting.

Having a whole profession for that would be kind of awesome! People could specialize on that, making a party more diverse.

I Love this idea! Very well thought out, however you would not need magnetite, just two iron nuggets that you rub together, and depending on the accuracy, the magnetism could make compasses more or less accurate. Nuggets are smaller versions of ingots.