Warning: A lot of this post is incredibly speculative, and may end up being defunct as we see more information about the subjects in this post.

We first heard of the mysterious race known as the “Kolmui” through a cosmetic known as the “Kolmui Envoy”, and the fact that very few people actually acknowledge what the existence of this cosmetic means baffles me. The Kolmu were not some barbaric race, they were developed, wore fancy and intricate attire, and had a robust enough political structure to allow for envoys. This opens up a massive opportunity for content, and I’m sure we will see it explored.

Lore and speculation
This is a very speculative bit, but it is basically the crux of my whole concept.

Who built the Televator? Who built the Shrines? I am certain that it could not have been the Townfolk, as their design philosophy is much different from these structures. So who built them? I believe it was this ancient, and long-gone race, known as the Kolmui.

But what does this mean? Well, it means that the Kolmui were able to harness a power that the Townfolk were not able to: Magic!
Skills? They seem pretty damn magical to me.
The Televator? Teleports you underground using the power of magical crystals which infinitely glow… Seems pretty magical.

The implications of this are large, and it seems rather clear to me that unlocking the secrets of this ancient race and understanding their technology will be the key to one of Township’s most anticipated features: magic.

The Kolmui City
So how does a city play into this concept? Well, of course, the Kolmui had a place to call home, and judging by how technologically developed they were (and the fact that they were to build such a grand structure as the Televator), then they must have had the capability to create a city. I believe that this city could act as a fantastic challenge, and provide plenty of rewards, such as the key to harnessing magic.

The city would be situated far away from the Township and would take a long time to travel to. This is the first challenge and one that may even require the existence of mounts.

Now we have to get a bit more speculative, but I believe this is very certain. The Kolmui city would be found ravaged by whatever struck the Township with the same force, a mysterious scourge on the world of Township. This would provide the second challenge of players having to fight their way through the destroyed city to some epicenter, which would probably shield the secrets to magic behind some great challenge.

Finally, the last challenge, being setting up defenses around the city and rebuilding it to prevent a further attack. This is a long term time sink that the Community must manage so that the city can act as another Town and a place of training for those who wish to become adept in the arts of magic.

I purposefully didn’t go too into detail, as this is more of a general concept that can be built upon in the future. I truly believe this concept is already planned, as there is plenty of foreshadowing in the game and outside of it for something like this.

Feel free to leave feedback in the comments.

This is a fantastic concept for some lore and challenges to get magic for the townfolk. I personally was never too keen on the idea of just getting magic, I always felt like it should be locked behind a challenge of some sort. There are so many ways this could tie in with other ideas too. The journey would require mounts like you said, but what if you also had to use boats? Another thing that could help with this idea is something GalexY found on “A Galactical Tale” that (according to him) isn’t present in any of the official servers. Its a large castle gate structure that is built with the same material and in a similar style to the shrines and televators. I’ll get a screenshot of it tomorrow.

A wonderful concept!
And I’m mostly with you as of the Kolmui to be that greater race that was able to build the shrines and televators. But what strikes me most is the question:
Is it really the shrines that give us the magical skills, or are these just helping us to unlock, what lies inside us?

Here is my concept trying to self explain this stuff:

I do agree with your interpretation of magic, as we already see examples of it in game. The level up particle effects are golden, while the Kolmui Shrines are that light blue. I would interpret it as the player converting that golden energy into the crystal energy the Kolmui have harnessed.

Maybe it’s just a matter of race.
Both races react different on the same magic. Kolmui blue, we (name needed) golden /yellow and Hebios, if magic at all, maybe green. Would be a simple way to determine the origin of a spell / skill / magic mechanism.

That way we could tell if someone did achieve something by himself, or if he just used a foreign magic.
Or like you see something magic happening and warn your comrades “Hebios magic ahead! Keep cautious! They got to be near!”

That would be interesting, racial magics sound like an interesting way to group things, but perhaps with enough study, a tuned magical scholar could also use other racial magics, of course not as proficiently as that of their race. Another thing I’d like to add is that the thing I like best about this idea is that it is all still compatible with my magic programming idea (for the most part).

I got the screenshots, but I’m lazy so I’ll just give you this discord post. 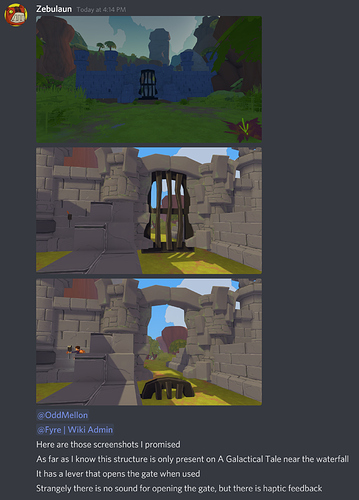 Jokes aside I don’t really see the golden light as the color for our magic, partly since golden and leveling is already a known thing and even when we do any kind of skill it’s still blue nor do we see gold anywhere in our orbs.

I think it’s the colour for our magical energy, which we then convert into Kolmui magic.

Converting magical energy could be a REAL cool way do give the system some balancing!
Like when you do some magic of your own color / race (that sounds so awfully wrong), all energy will go directly into the spell or whatever.
If you like, you can learn foreign magic but the convertion will take some energy or the outcome won’t be as strong as done by a native magician of this color.

Mfw we found out we were the Kolmui. ;-; still other cities or civs are cool tho